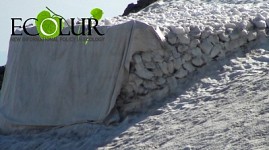 A Number of Communities Don’t Get Water Because of Poor Condition of Storm Drains
“Talin area is in the worst area. The state of reservoirs and storm drains is miserable: the storm drains were constructed in 1954, but now they are destroyed

Whether Construction Works Implemented in Karbi Gorge Lawful? (Photos)
Construction works are being carried out in Karbi Gorge, Aragatsots Region, without having relevant environmental expertise opinion this eliminating the local picturesque environment, as Silva Adamyan is beating an alarm signal

Gegharot River Water Again Muddy: Aragats Community Residents Converned: Village Head Sure It's Caused by Snow Melting
The river of Geghot river, Aragatsotn Region, which supplies water to Aragats community and irrigable land areas of several neighboring communities, have changed and become muddy in recent years.“The residents wondered what was the reason for

10 Towns in Armenia Committed to Reduce CO2 Emissions by 20% Till 2020
The Nature Protection Ministry organized a discussion with the community heads having joined EU ‘Covenant of Mayors’ initiative towards the 21st convention of the UN Framework Convention on Climate Change. Out of Armenian towns joined

Lebanese Company Wants To Present 20,000 Fur Trees to Ashtarak Town
One of the Lebanese companies expressed its wish to present around 20,000 fur trees to Ashtarak town, as Extraordinary and Plenipotentiary Ambassador

Priority Given to North-South Road Corridor Over Certain Lands in Aragatsotn and Shirak Regions
On November 6, 2014, the Government of the Republic of Armenia decided to give priority over lands in certain communities in

Buried Pesticides Under Examination in Several Regions
The NGO is concerned with the absence of safety measures for people and environment, “Pesticides may cause incurable damage to health penetrating into the organism with water and agrofood. They harm kidney, respiration and

Environmentalist Greta Gabrielyan to "Mego Gold": "Let Community Know that You Are Working Illegally"
At the public hearings on Tukhmanuk gold mine project held in Meliq Vellage, Aragatsotn Region, on 10 September the company director Ashot Poghosyan and environmentalists had an argument

Meliq Villagers Don't Believe "Gentleman" Promises by "Mego Gold"
“Under the geological and environmental data, when a tailing dump is full, it must be covered with a thick layer of ground and fenced so as an animal or human doesn’t enter its territory. The first tailing dump is full, nothing was done, the second is full as well… even a drop of rain causes it to flow into the river, which we use