WWF-Armenia launches Leopard Caretakers Network Project (Photos)
Since 2002, WWF has been implementing a conservation project on this species in Armenia, thanks to which the animal not only returned to Armenia but also registered a positive trend.

81.9% of Armenian Territory Exposed to Different Degrees of Desertification
24,353 square km or 81.9% of the territory in Armenia (omitting Lake Sevan and the mirror surface of reservoirs) is exposed to different degrees

Remaining Amounts of DDT and Other ChlorOrganic Pesticides Detected in Land Areas and Breast Milk in Armavir, Ararat and Aragatsotn Regions
The studies carried out in 9 communities in Armavir, Ararat and Aragatsotn Regions recorded excess of the permissible standards of the DDT in the soil in five communities and remaining amounts

Newly Founded "Red Mountain" Foundation Undertook Supervision over Buffer Zone of Khosrov Reserve (Photos)
According to the residents, Ishkhan Zaqaryan, Chairman of Control Chamber RA and several other people use this water to irrigate the orchards they established 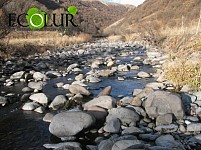 Increase by 30-110 Cm Observed in Deep Wells in Ararat Region
In some part of Ararat Region increase of deep wells by 30-110 cm has been observed, as

Aras River Damaged Banks To Be Reinforced
The Armenian Government will allot 677,600.0 AMD to “Melioratsia” CJSC to carry out anti-flooding measures in Ararat, Armavir, Gegharkounik and Syunik Regions. According to

Ecologically Clean Agro Products To Be Produced in Three Regions of Armenia
The project, entitled “Enhancing livelihoods in rural communities of Armenia through main-streaming and strengthening agricultural biodiversity conservation

Flora and Fauna in Armenia Endangered
Ararat Region is the “leader” in the number of red-listed species appeared in the Red Book of Armenia – 143, followed by Syunik and Gegharkounik Regions