Lake Sevan Level Decreasing Day by Day: Reduction of 8 Cm
Only in 26 days the level of Lake Sevan decreased by 8 cm: EcoLur continues tracking the decrease in Lake Sevan level because of water intakes. In 2017 Lake Sevan had the highest indicator – it reached the height of 1900.91 meters

Because of absence of any water all the crops and trees have dried out in Nerqin Getashen community, Gegharkounik Region, Armenia. During their trip to the community, the residents complained to EcoLur that July is about to be over, but they haven't

Astghadzor Community in Gegharkounik Region is facing hard social problems because of the absence of the irrigation water. As a sign of protest, Astghadzor residents blocked Yerevan-Vardenis-Artsakh strategic road on 10 July. During their meeting with EcoLur

What “ArmWaterProject Institute” Director Yuri Javadyan Keeps Silence About?
“ArmWaterProject Institute” CJSC Director and a member of Public Council, Chairman of two committees on Lake Sevan Ecosystem Preservation both by Armenian President and National Academy of Sciences of Armenia Yuri Javadyan gave comments to Yerkir Media TV on the bill on making 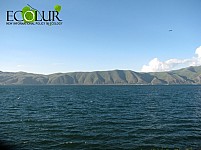 When Lies about Sevan Finish and Reality Starts?
After the break of one or two years, the Armenian Government once again requested the National Assembly to give agreement to amend RA Law 'On Approving Annual and Complex Programs for Recovery, Conservation, Reproduction and Use of Lake Sevan Ecosystem' and to add annual water