Lake Sevan Level Started Decreasing
The Level of Lake Sevan has started decreasing: during these four days it decreased for 2 centimeters from 1900.91 meters to 1900.89 meters. Last year on 29 June the lake level was

Signature Collection To Be Initiated Against Additional Water Intake from Lake Sevan During S.O.S. Sevan Initiative's Round Table-Consultation-Press Conference
A large hazard threatens Lake Sevan because of the additional water outlet of 100 million m3. The government substantiates its decision with the electricity production volumes at Sevan-Hrazdan hydro cascade and the increase 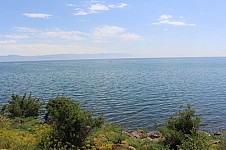 Two Trucks of Sand Taken out of Lake Sevan
The employees of State Environmental Inspection of RA Nature Protection Ministry recorded tow cases of taking out sand out of Lake Sevan. In this regard, a protocol has been drawn on the violation of the rules and regime of the preservation of specially protected natural

RA Prime Minister on Increase in Sevan Level
On 11 May RA Prime Minister Karen Karapetyan visited RA Nature Protection Ministry. The Minister was reported that as of todat the level of the lake made up 1900.76 meters with a positive tendency