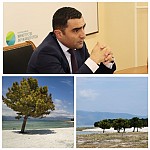 Entrance of Visitors to Norashen Reserve and Sanctuary Area of Sevan National Park SNCO To Be Banned for 6 Months
On the instruction of Acting Environment Minister Romanos Petrosyan, the entry of visitors will be bannedfor a period of 6 months in the territory of Norashen reserve and sanctuary of "Sevan" National Park SNCO

Seaside Startup Summit 2021 Cancelled Because of Regime Restrictions of Specially Protected Areas
The proposal to hold the event in another place under the management of Sevan National Park, which does not have the status of a reserve or sanctuary, remains in force

Lake Sevan Level Decreased by 7 CM within 13 Days
As of June 21, the level of Lake Sevan dropped to 1900.84 m as compared to the same day last year

Lake Sevan Started Blooming: Level Decreasing
The process of the lake blooming has started, as a result of which the value of transparency was observed in the very low range of 2-2.7 m

Government Granted Privileges to Companies Building Solar Stations in Astghadzor and Aragatsotn
By RA Government Resolutions № 909 - A and № 907 - A dated on June 3, 2021, "Bari Arev" and "AS Energy" LLC received privileges to import the necessary equipment and goods for the construction of solar stations

Responsible for Sevan
In May, about 600,000 willow seedlings will be planted in the riparian zones of a number of rivers flowing into Lake Sevan. Cleaning activities will also be organized in these riparian zones

Enquiry to Ministry: How Problem with Wastes Generated by Solar Energy To Be Solved
"EcoLur" addressed a letter to RA Environment Ministry

Second Stage of Industrial Whitefish Fishing Launched In Parallel with Reduction in Whitefish Reserves
The second phase of the industrial whitefish fishing project officially starts on March 25. It should be noted that before that, whitefish fishing continued, albeit illegally, and whitefish is sold freely in Yerevan markets

Whitefish Stocks in Lake Sevan Reduced
According to the estimates by Scientific Center of Zoology and Hydroecology of NAS RA in 2020, the total whitefish stock in Lake Sevan constituted 2345 tons, out of which the industrial stock made up 586 tons