EM Representative: Lake Sevan Blooming To Last Till 20 August
Flowering in Lake Sevan will last until August 20 this year, as Gayane Shahnazaryan, Deputy Director of the Hydro-Meteorological Monitoring Center of Environment Ministry

Lake Sevan Again Bloomed: Scientists Developing New Tool To Fight Against Algae
Lake Sevan is has bloomed this year as it was last year. "According to our data, the mass blooming of Lake Sevan has already started. Depending on the temperature and the amount of 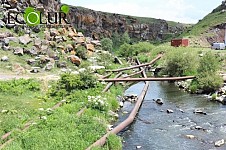 RA Environment Ministry’s Response to EcoLur on Argitchi River Water Distribution Problem
As well as to avoid misunderstandings, so that information on the extension of the WPs is published on the Ministry's website

Lake Sevan Level Started Decreasing
As of July 6, the level of the lake is 1900.82 m and is only 1 cm higher than the indicator of the same day last year

RA Police Rejected To Instigate Criminal Case on Water Problem in Astghadzor, Whereas Astghadzor Residents Applied to Prosecutor's Office Demanding To Annul This Decision
Martuni Department of Gegharkunik Regional Department of RA Police refused to initiate a criminal case on the issue of Astghadzor water based on the application filed by Public Environmental Court

Armenian Government Set Maximum Amount of Whitefish Fishing in Amount of 200 Tons: How Much Whitefish Caught From Beginning of Year?
A question arises as to whether the fishing of whitefish, which has already been carried out in 2020, has been taken into account in determining the amount of industrial hunting of 200 tons of whitefish

Water Intake for Irrigation Purposes Launched from Lake Sevan
As of June 11, 9 million 744 thousand cubic meters of water has already been released out of the lake

Lake Sevan Blooming: Fish Reserves Reduced
Cyanobacteria (blue-green algae) have been observed in Lake Sanaa, and the initial stages of the lake's blooming have already begun