1.250 HA for Wind Energy Production Provided to Company Registered in UAE
the capacity of the anticipated wind mills will make up to 150 MW, while the extent of investments will make up US $ 150 million 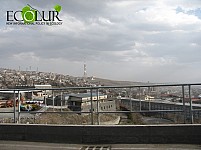 Nepheline Syenite Again To Be Developed in Armenia
'Sos-Saqo' LLC intends to develop Alvanq nepheline syenite open mine in Syunik Region. Nepheline syenite is a raw material for aluminum, as well as for high-quality cement. On 17 January the public hearings

Seven Million Euros for Construction of New Landfill Site in Kotayq
A new landfill site is planned to be constructed in Hrazdan Town, Kotayk Region, which will cost 7 million Euros. The European Bank for Reconstruction and Development will grant a loan

Nature Protection Ministry Assures that Nubarashen Pesticides To Be Eliminated Abroad
The issue of liquidation of Nubarashen pesticide burial has received contradictory evaluations: the greatest concerns are related with the establishment