“Jin Holding Limited” LLC To Try To Hold Public Hearings in Urut for Third Time
Both residents and environmentalists and active civil society are calling for unity on social media in being present in the community that day to prevent this one attempt of a public hearing.

Mining Company Representatives in Qaraberd Supported Project, Residents' Voice Not Heard
The locals participating in the public hearing were divided into two areas: some were against any work on the mine, and those in favor justified their position with the prospect of creating possible jobs in the community

Public Hearings on Geological Prospecting in Qaraberd Gold Mine Launched
The latter expressed their concern that the mine is very close to residential houses. In case of further development, the regional center of Lori, Vanadzor, will not be left without negative consequences either

Accusations Filed to Officials in Charge of Protection of Forest Fund in Lori Region
In the period from July 28 to September 1, 2021, charges were brought against "ArmForest" SNCO 6 forest heads and 3 foresters under Article 315, Part 2 of RA Criminal Code

"Yaghdan SHPP" Caused Damage to Environment for 22.5 Million AMD
During the irrigation season, the company carried out 11 million 278 thousand 656 cubic meters of water, which was not provided for in the water use permit

Development of Socio-Ecological Policy in Mining-Impacted Communities in Lori Region in Active Stage
The residents confirmed that the development of a socio-environmental policy could be the key to the further development of their community; they were able to involve locals and an active society in that process

Tool - Format Developed To Establish Socio-Ecological Database in Communities
Project Expert Rosa Julhakyan presented the draft main structure of the toolkit-format, according to which a 3-part toolkit-format is proposed

39 Trees Illegally Felled Down in Gugarq Forestry Enterprise
The employees of Nature Protection and Mining Inspection Body in the territory of Gugarq Forestry Branch of "ArmForest" SNCO, found 39 illegally felled down hornbeam, beech and willow trees 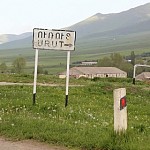 Public Hearings Organized by "Jin Holding Limited" LLC in Urut Not Held; Company Representative Didn't Attend It
Minutes were drawn up with the participation of local residents and activists gathered in the Urut administrative building that the public hearing did not take place because the company representative did not appear

Illegal Tree Felling in Lori Region
The driver did not submit a relevant document for about 5 cubic meters of wood in the car, stating that he cut wind-fallen oaks with a chainsaw and the branched of a standing linden tree in the outskirts of Dsegh Village on July 27 and August 1

Sampling For the Study of Chemical Pollution of the Areas of the Lori Region Has Been Completed
A total of 136 samples were collected during recent sampling in Lori region - area affected by industrial pollution - including samples of house dust, soil, sediments, dairy products and biomaterials