Garbage: Main Obstacle to Regional Tourism Development in Sisian
'Out of the historical monuments, the Vorotnavanq is located on the road, where the main landfill site of the town is situated: the garbage is not sorted, recycled – it's burnt down poisoning

100 Sq. M. Area of New Fire Spot in Khoustoup Reserve Extinguished
On August, at 19:30, a fire broke out in Ayrivan section of Noratuz Branch of 'Sevan' National Park, which resulted in burning out 150 sq.m. of the dry grass-covered area. The fire 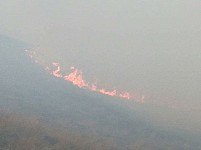 Fire Broken Out of Enemy's Quick Squirt in Arevik National Park Extinguished
A fire broke out yesterday at 15:30, on 14 August, because of the enemy's quick squirt in the area called 'Kalpek Cold Spring' in 'Areviq' Branch of Arevik National Park, a part of 'Zangezour Biospheric

AEF. According to international acclaimed experts gold project in Amulsar should not start։ What has Lydian hidden and what the Armenian government has been “unaware” of
Now international acclaimed experts in the field have also joined Armenian experts and based on the proposal of the US-based Harout Bronozian, they presented results of three different expertises on this gold project. The results of these researches once again confirm the statement voiced for many years that gold project in Amulsar should not be launched since the assessment carried out by Lydian are extremely incomplete, while the government

Civil Society Doesn't Agree with IFC Ombudsman's Office Conclusions on Complaint of Incompliance of Amulsar Project with IFC Standards
The Ombudsman's Office of the International Finance Corporation, CAO/IFC (World Bank Group) sent the initial results of the audit on the complaint of incompliance of Amulsar open gold mining project with IFC standards, so as the IFC refused from funding the project. The complaint was submitted to CAO by two residents

Litchq Mine Case Dragged On
The court case on Litchq mine is being dragged on: the court hearing appointed for today has also been adjourned: 'EcoRight' NGO President Arthur Grigoryan, who is

Gorayq Community Demanded from 'Vorotan-7' SHPP Developer to Install A Water-Meter to Control Environmental Flow
device. 'For example, one of my residents wants to go and see on the spot how much water is let out into the SHPP, how s/he shall do it? I have demanded to pay a close attention to the environmental

AEF: What Happens with Shikahogh Reserve and Artshakh Forest Frontier
When comparing the coordinates, we and the employees of 'Zangezour Biospheric Complex' SNCO got convinced that these works have been carried out in the administrative area of the Republic of Armenia, while the eastern borderline of 'Shikahogh' Reserve overlaps with

Meghri River Basin Overloaded with SHPPs
The Armenian Government granted tax privileges to 'Green Power' LLC for the construction of a small hydropower cascade on 18 May. The payment of VAT for the import of goods by the company