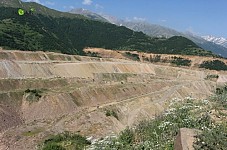 The Secret Owners of Armenian Molybdenum
The real Armenian shareholders of Armenia's largest enterprise, Zangezur Copper and Molybdenum Combine (ZCMC), have been anonymous to the public for years. Since the 2004 privatization, there have been

Preliminary Estimates of Damage Caused with Accident of ZCMC Pipeline Sent to Syunik Regional Prosecutor’s Office
It is also noted that inspections carried out by the inspection body since October 28, 2019 at Zangezur Copper and Molybdenum Combine are ongoing

Criminal Case Initiated Based on Damage of ZCMC Wastewater Pipeline and Pollution of Voghji River
On October 17, 2019 a criminal case was initiated in Syunik Regional Prosecutor's Office on damages caused with the breakdown of Zangezour Copper and Molybdenum Combine pipeline and

Reason for Voghji River Pollution Detected
I just returned from the Geghi River. There were also Environmental and Mining Inspection staff. The water was clear there. The turbulent stream was flowing into the Voghji River from the tunnel of the Jrakhor HPP

Fire in Drying Workshop in Qajaran Combine Area
On October 25, at 11:19 am, 911 received an alert that grass was burning in the area of ​​the plant in the Qajaran town of Syunik Region

Two-storey residential house had collapsed near Kajaran base of Kapan town: rescuers took the corpses out from the debris
It turned out that there was a landslide (about 2500 m3), as a result of which a two-storey stone house in the 5th lane of Erkatuhainneri street of Kapan town was collapsed

Accident in Artsvanik Tailing Dump Pipeline: Polluted Water Flowed into Voghji River
Early in the morning of October 17, the water currents from the Artsvanik tailing dump owned by Zangezur Copper and Molybdenum CJSC flooded into the Voghji River

Because of Lack of Water in Rivers ZCMC Intends to Take Water from New Rivers
Zangezur Copper and Molybdenum Combine (ZCMC) new water usage permit plans not to increase the water intake but to use three more rivers as a resource, in addition to the 3 water springs already in use

"Zangezour Copper and Molybdenum Combine" To Provide 80 Million AMD to Kapan Community
According to the official website of the Kapan municipality, the agreement was reached between Kapan community head Gevorg Parsyan and ZCMC CEO Mher Poloskov