Who Will Bring Minister to Justice?
On 24 October Nature Protection Minister Aram Harutyunyan, replying to Deputy Zaruhi Postanjyan’s question at the National Assembly, admitted that, under the preliminary findings, the construction company had deviated from the project while constructing 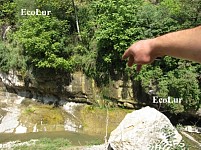 Whether Minister Aram Harutyunyan Will Bring to Justice “Environmental Expertise” SNCO Employees?
The official website of Nature Protection Ministry informs the positive opinion of the environmental expertise on the construction of “Khachaghbyur-2” project was considered null and void based on Nature Protection Minister Aram Harutyunyan’s order. The ground for this

Activists Demanding to Recognize Permitting Documents on Khachaghbyur -2 Null and Void
The activists expressed their particular opinion on the small HPP Khachaghbyur – 2. Reminder: this working group was set up by Nature Protection Minister’s order for examining the current situation with Khachaghbyur – 2 SHP. The working group

Loir Came out of Forest
Loir came out of the forest. Karine Harutyunyan sent to EcoLur photos from Chinchin Village, Tavush Region. In the village they saw an animal, sized 15 cm

Environmental Expertise Didn’t Notice that “Khachaghbyur-2” SHP Being Constructed on Specially Protected Area
“Khachaghbyur-2” SHP is being constructed in specially protected areas, “Ijevan” and “Hazel Forests”. At the same time the project says that “the construction area doesn’t include any specially protected areas.” In regard with this contradiction, “Trchkan” civic imitative

Small HPP Khachaghbyur-2: Complete Documental Mess
Complete documental and legal mess (if not to say more) has been formed in regard with the construction of “Khachaghbyur-2”

Gates Closed, Traces of Tree Felling
The gates are closed, while the traces of tree felling are evident. EcoLur has received an alarm signal from Arthur Igityan, Dilijan. He sent photos to EcoLur. “I took this photo 1.5 km away from

Content of Landfill Site in Dilijan Dumped into Aghstev River (Photos)
"2-3 km away from Dilijan is located the landfill site of the town hear Dilijan-Vanadzor highway, next to Aghstev river. The landfill site is full and its content is dumped directly into the river. The river flows through Dilijan and Ijevan towns..."

Soil at Expense of Tavush Forests
Energy and Natural Resources Ministry issued a license for geological prospecting in Tavush region. We speak about Aghetkin copper and molybdenum mine and Kanchalaqar copper mine. The licenses have been issued to