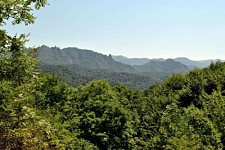 ENPI FLEG NPAC meeting in Tavush marz
During the discussion all the participants acknowledged the importance of sustainable forest management, and importance of treating three components – 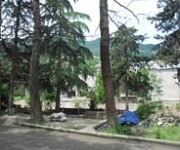 Building at Expense of Trees
Another construction is in progress in Abovyan Street in Ijevan, Tavush Region, and huge trees will be sacrificed for another building.

Illegal Tree Felling in Dilijan Forest
On May 28 at 08.50 Lori Region policemen and Gougark Department employees checked Ford Transit “80 2.5-De” car, its driver is Aragats S., 40, in Fioletovo Village. The car was loaded with 2.8 m2 timber.

Tree Planting in Tavush Region
On May 2, Ijevan Aarhus Centre initiated tree planting activity at the10th km sector of the Ijevan-Noyemberyan interstate highway, aiming at restoring thinning out parkway, as well as making it larger.

Eagle Given to Zoo
Berd Town resident Mher G., aged 30, displayed an announcement in the Internet about the sale of an eagle at a price of 500 USD who came to the view of the police.

AGSTEV IN DISASTROUS SITUATION
The significant part of the household garbage from Ijevan Town is dumped into the Aghstev River such as wastes of organic nature, food waste, inner organs of slaughtered animals, industrial waste etc

BUSINESS SECTOR TARGETED AT ARMENIAN FOREST
"We visited three village communities of Tavush where they told us that there is no industrial wood or the trees for the forest sanitation in the villages of the Tavush region in the radius 5-6 km. It is no secret that in winter local residents use wood for heating. They get the wood illegally making arrangement with the needed people about cutting"

SHOCKING SPACE DATA ABOUT ARMENIAN FORESTS
Forest planning plans proposed by “ArmForest” SNCO are not substantiated. These plans incorrectly show forest-covered territories and forest structures, light forest is mentioned instead of dense forests and the contrary. On the basis of these plans one can’t conduct planned felling, sanitary felling and even reforestation.

BUSINESS DECIDED TO GET TO INACCESSIBLE FORESTS WITH HELP OF BUSINESS PLANS AND INVESTMENT PROGRAMS
“We don’t have forests of industrial significance. What about sanitary felling, in the radius of 5-6 km of forest communities, you can’t find a forest where you can obtain industrial timber,”

IJEVAN WOODCUTTERS CASUED DAMAGE TO STATE IN AMOUNT OD 577.500 AMD
On February 21 a meeting was held at the Aarhus Center between state and public bodies, which was devoted to illegal felling. “Progress” LLC President Geghetsik Ghulakyan said: “I’m informed that in many cases the forestry officer takes money and allows tree felling.”

WASTES DISTURBING TAVUSH FORESTS?
In my opinion, the very Tavush Regional Head disturbs the forest most of all. So far no wastes have disturbed him, and what about now?
CRIMINAL CASE INITIATED ON TREE FELLING
10 days ago 21 trees were cut down on Antaramijyan street, Ijevan. A criminal case has been initiated on this fact. The trees cost 192,500 AMD, while damage caused to nature was assessed in the amount of 577,500 AMD.

NO COMMENTS: VOICES FROM DILIJAN
EcoLur continues its series of short reports from the communities located near forests under a general name of “No Comments: Voices from Communities Located near Forests.” In this series we publish the report from Dilijan.
“DILIJAN NATIONAL PARK” LEASES 59 HECTARES IN BIDS
According to Mr. Artashes Ziroyan, Head of the Bioresources Management Agency at the Ministry of Nature Protection, some 58.95 hectares of the Dilijan National Park’s recreational zone has been distributed for rental purposes via competitive bidding.