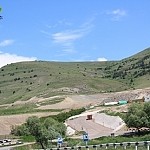 250,000 Trees To be Planted in Fall Afforestation
About 1000 saplings were planted in the territory of Yerevan

Public Hearing Did Not Take Place. What Is Happening in Gladzor?
The meeting started in a tense atmosphere with the participation of the residents supporting and opposing the mine, the mining company, local authorities, and civil society representatives

"Metal Gold" Not Giving Up: New Public Hearings in Gladzor
"Metal Gold" company is once again organizing hearings on geological prospecting in Gladzor gold-polymetallic mine in Gladzor community

Armenian Deputy Prime Minister: I Opt for Amulsar Development
Papikyan responded to the observation that there are concerns that the surrounding communities will suffer and people's health will be endangered