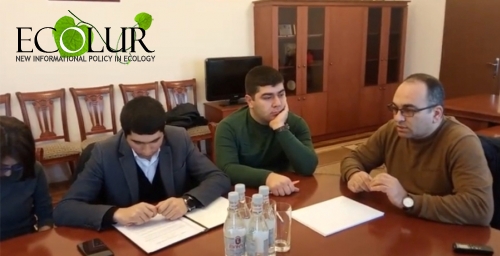 The mine is 350 m away from residential buildings, between the 3rd and 4th villages. “The mine covers 320 hectares, with reserves of 11 million cubic meters. Our company is requesting mineral resources of 8.8 hectares, which are approximately 2 million cubic meters in size. They are mainly tuffs - 1.3 million cubic meters and basalt - 700,000 cubic meters. The mine will be operated in an open manner. … There will be no explosions because there will be cracks in the rock at that time and they will become useless. In order for the stones to become tiles, sawmills will be worked in the gravel and crushers will be used for gravel,” Shahen Khachatryan said, a geologist at the company.

According to the participants, the option of dust neutralization with water may not be the best option given the current scarcity of water due to climate change. Another resident noted that it is possible that in addition to saving water and avoiding financial costs, water neutralization may not be properly implemented.

Gevorg Babayan, Head of Ajapnyak district, said there were no water sources near the mine, and it would be necessary to build a pipeline. "Veolia Water will hardly agree to give you drinking water to irrigate the area. The nearest point of irrigation water is about 10 km straight away, there is another point which is 15 km away,” he said.

Gayane Melkomyan, a member of "My Step" faction of Yerevan Aldermen's Council, who was present at the discussion, suggested the company representative to consider and implement more sustainable business plans. "Today, Yerevan has a high level of air pollution, including from vehicles. As a resident and as a member of Yerevan Aldermen's Council, passing on the opinion of some of my colleagues, I think that one should not consent to the opening of another mine.

I am ready to hold an additional discussion with our members of the Council and then present our opinion on these public hearings and the mine proposal,” she said. As a result of the observations and positions discussed during the hearings, the Municipality of Yerevan will present to the company its decision on the operation of the new mine within 5 working days.