Damage of Over 54 Million Caused to Environment
In the mentioned time period 1,319,020 AMD was credited to the state budget

Damage of Over 26 Million Caused to Environment
In the mentioned time period 969,350 AMD was credited to the state budget 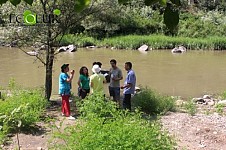 Open Letter of "ACP" CJSC Staff to Armenian PM Nikol Pashinyan
The staff of “ACP” company is asking to take measures to solve the aforementioned problem, otherwise the population of Alaverdi Town will have to take drastic and unpredictable actions, which

Tense Discussions in RA Nature Protection and Soil Inspection Body Around 'ArmOil' Plant
The Inspection representative mentioned that the construction area exceeded 1500 sq.m. and made up 26856 sq.m., thus it is