Yeghvard Residents Found Themselves on "Atomic Bomb": Environmental Disaster
Environmental disaster: this is the only word Nati neighborhood residents from Yeghvard Town can use to describe the current situation they are in. Only in a distance of 50 meters from their houses, just a street afar, 'ArmOil' Company is constructing

Sulphur Dioxide, Nitrogen Dioxide and Dust Concentrations Exceeded MPC in Atmospheric Air Adjacent to Nairit
The relevant divisions of RA Nature Protection Ministry took samples of atmospheric air pollution within the ranges of 14:30-15:00 on 28 August in the areas adjacent to Nairit Factory. Under the sampling of atmospheric

Lackethinol Chemical Burnt Down in Nairit
Under the initial information, lackethinol substance is being burnt down in the area of 'Nairit' Factory. As it is informed from the scene, there aren't any hazardous emissions because of the burnt down material and

Explosion and Fire at 'Nairit' Factory: Fire Extinguished
The fire was isolated in the ranges of 14:00; there is no hazard of fire spread. Under the MES, the substance on fire 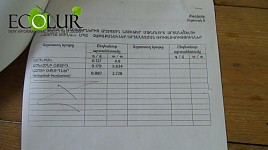 World Economic Forum Declares About Refusing from Cars in Largest World Capitals
In late 2016, Madrid's Mayor Manuela Carmena reiterated her plan to kick personal cars out of the city center.

"Critical Level" of Air Pollution To Be Defined
As of October 2016, no excess of MPC in atmospheric air pollution was recorded, while the MPC of atmospheric air in Alaverdi, Gyumri and Vanadzor town was exceeded

According to Nature Protection Ministry RA, Emissions 'Pure Iron' CJSC and 'Armenian Titanium Production' LLC within Standards
EcoLur has received an alarm signal from Yerevan resident that it's impossible to breathe air from from 21:00 p.m. to 01:00 a.m. because of the emissions

Since 2005 Artik Air Basin Ignored
Though Artik Town is located under the impact of stone pit dust, atmospheric air monitoring hasn't been carried out here since 2005

In Gndevaz Villagers Have To Walk Through Flowing Sewage and Simultaneously 'Enjoy' Stink of Poultry Factory Guano
Gndevaz villager, Vayots Dzor Region, has beaten an alarm signal to EcoLur in regard with the community sewage breakdown and the stink coming from Gndevaz poultry factory guano. 'The sewage line

Chemical Disaster in China (Photos)
On 12 August the explosions rocked the northeastern coastal city of Tianjin, killing at least 114 people, 772 people taken to hospital, at least 95 people are still missing