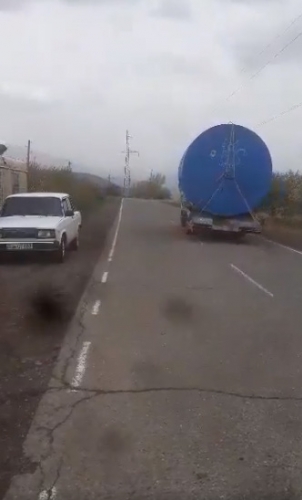 On May 6, 2020, a part of the property leased by Lydian Armenia CJSC was taken out of the Amulsar area. Shirak Buniatyan, a Jermuk resident and one of the young people who blocked the roads leading to the Amulsar mine, posted about this on Facebook.
In his interview with EcoLur, he said: "Probably only the property of "Lydian Armenia" remained. About a dozen of equipment is left. We will not let them take it out. After the final decision, they must restore the destruction they have done.”
Shirak Buniatyan does not connect the withdrawal of equipment from the Amulsar area with the rumors circulating about the possible sale of the project. However, he and his supporters are convinced that the emergence of a new owner will not change their course of action.
"I think if the organization implementing the project changes, it implies a new EIA, new public hearings. But we don’t not rely on such things. We have said that it is not important for us who will try to develop the mine in Amulsar, our struggle will be the same, in accordance with the given situation. If Lydian has adopted a passive attitude at the moment, we are also passive. If the new organization will try to be adventurous and be active, they will get an adequate response from the population," he said.