On 16 August Jermuk Residents Getting Ready for Meeting with RA Prime Minister Nikol Pashinyan in Jermuk
Mr. Nikol Pashinyan, the residents of Jermuk are waiting for you to decide together the future of Jermuk on August 16 at 2:00 pm

ELARD Experts Left Question on Health of Population Unanswered
Which risks, in particular, were not taken into account in terms of environmental security in the ESIA and EIA Reports? What dangers to the environment and to the health of the population may occur as a result of their omission?

There Are No Grounds For Prosecution in Amulsar Case: Investigative Committee Official
Through an analysis on the conclusion of the expert examination designated for exploitation of the Amulsar gold mine, the body conducting proceedings found that there are no grounds for criminal prosecution to continue the proceedings

New Film on Fight To Save Amulsar
On 30 July, 2019, British “War on Want” and “Globarl Justice Now” NGOs announced about their support to the fight against Amulsar gold mining project initiating a global petition against the ISDS

UK-based NGOs have joined the Save Amulsar Campaign and Petition against Lydian’s move to sue Armenia’s Government at corporate court
Campaign groups Global Justice Now and War on Want have called for Boris Johnson’s government to rule out so-called ‘corporate courts’ after Brexit, following a report today by parliament’s International Trade Committee describing the investment provisions as “hugely controversial”

Investigative Committee Clarifying why Investigators and Experts Visit Amulsar Area by Transportation Means of Lydian Armenia
It is possible to go to the mine area only with special transport means which aims ensuring the safety of expert group, while the company has provided such cars upon the demand of the body implementing the investigation

Amulsar Protectors Didn't Allow Investigator and Experts To Enter Amulsar Mine Area
On 13 July, the Amulsar protectors didn’t allow the investigator of RA Criminal Committee and the experts invited within the frames of the criminal case instigated based on the fact of illegal soil management in Amulsar to enter the area of Amulsar gold-bearing quartzite mine

Ombudsman Demanded Clarifications from Police for Anna Shahnazaryan's Case
On its own initiative, the office of RA Human Rights Defender initiated discussion procedure as soon as it received information about the detention of Anna Shahnazaryan

Amulsar Mine in Armenia: Government Must Avoid Potential Environmental and Human Disaster
Initiated in a climate of corruption, the operations were suspended in August 2018 following strong opposition actions by local communities and non-governmental organizations (NGOs). FIDH warns against the disastrous toll that the mine’s operations would take on local communities. 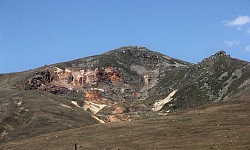 Expert Assessment Opinion on Amulsar Mining project Received
On 31 May 2019, the Investigative Committee received the preliminary opinion of the complex expert assessment on water resources and geology appointed for Amulsar gold-bearing quartzite mining