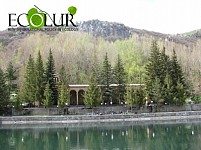 Jermuk Aldermen's Council Rejected Proposal of Armenian Government to Abolish Resolution on Banning Metallic Mining in Community Area
At its extraordinary meeting on 31 January, Jermuk Aldermen's Council rejected the proposal made by Minister for Territorial Administration and Development Suren Papikyan to abolish the previous resolution on banning metallic mining in the area of the community

Eduard Aghajanyan: I Want to Deny Those Concerns That We Paved Way for Amulsar with Arthur's Resignation
Staff Head of the Armenian Prime Minister Eduard Aghajanyan denies the relation of the dismissal of Ex-Head of Environmental and Mining Inspection Arthur Grigoryan with Amulsar gold mine

New Government Stuck With Amulsar Problem: Following Arthur Grigoryan’s Mystical Dismissal
Under environmentalist Inga Zarafyan’s observations, Arthur Grigoryan has acted in the frames of the law and his competences and the decision on dismissal was probably reached because of the existing conflict of interests

Metal Mining Banned in Jermuk
Direct democracy won another victory in Armenia. On December 18, 2018 Jermuk Community Council adopted a decision to approve the collective petition of its community members on “Declaring Jermuk an ecological economic area and banning metal mining in the community”.

Lydian Armenia Asked Court To Confiscate 1 Million AMD from Environmentalist Levon Galstyan
The offshore mining pirates have sues me as if I have defamed them. They are demanding from the court to obligate me to deny this information, to pay their court fees and to confiscate 1 million AMD in favor of