As Mr. Folen left the room without waiting for the reply to the allegations addressed to Inga Zarafyan, EcoLur has to submit reply comments in writing 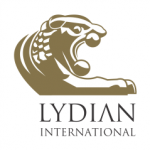 PEF: 100 Million $ Gift to Amulsar Gold Mining Project of Lydian International Company from Armenian Government
Lydian International Limited Company registered in offshore zone, British Jersey Island, published a press release, which says there is a possible significant reduction in operating costs of up to $100 million over the life of mine. It turns out this opportunity was granted 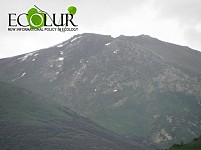 Legal Opinion on Amulsar Gold Mining Project
The environmental expertise of Amulsar gold mining project developed by “Geoteam” CJSC has been carried out with a number of violations of the Armenian legislation.

Amulsar open pit gold mining project and the construction of a heap leach facility caused litigation in court. Reminder: the project is implemented by Lydian International with the financial support of IFC, International Finance

In response to the questions addressed to Geoteam
To wrap-up the discussion of cyanide and to dispel the doubts on the “million tons” used in Amulsar, we’d like to say that IN TOTAL only 1.1 million tons of sodium cyanide annually is produced all over the world, with only 6% of this used in the mining industry worldwide. The remaining 94% is used in production of

Amulsar Mine Dust Can Get Spread Over 30 Km Distance
The problem is as follows: dust dissemination radius in Amulsar open pit mining EIA has been estimated and assessed up to 1 km, while the SIA plans to construct special hydrotechnical structures to prevent

Results of Amulsar Gold Mining Document Study Results: Conclusions and Proposals
This time it’s Harutyun Movsisyan, PhD in Geological Sciences, Associate Professor, who submitted his assessment on the official website of Aarhus Centers, www.aarhus.am, which particularly says: “The EIA submitted by the company mentions heap leach facility with a capacity of 106 million tons and says nothing that this volume is wastes to be collected in the tailing dump, which needs technical conditions, special project

Open Letter to "Geoteam" Company from Residents Concerned with Future of Gndevaz and Vayots Dzor
You mention that in the heap leach facility the PH of the sodium cyanide shall be 11 and over in order not to have hydrogen cyanide leak, the small amount of which is lethal. We would like to get clarifications how this process will be implemented in the area of 134 ha with 4 million tons of solution under temperature fluctuations from -30 to +30 degrees in the rain or snow or what 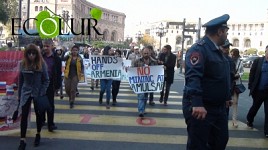 S.O.S. Amulsar Initiative: EBRD PCM Decision Non-Grounded
We feel compelled to express our concern regarding the eligibility decision in the case, which is inconsistent with the PCM’s Rules of Procedures (RoP) and demonstrates a worrying disconnect with complainants 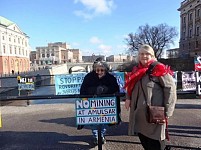 No To Mining at Amulsar, Protests in Sweden
օn February 26, in the capital city of Sweden, a group of environmentalists joined to the campaign against the mining at Amulsar initiated by Lydian International Ltd

Protest Demonstration against Amulsar Mine from Jermuk to Gndevaz (Photos)
The protest demonstration organized by S.O.S Amulsar initiative in the frames of "Dznemarduk-2015" festival held in Jermuk Town, Vayots Dzor Region from 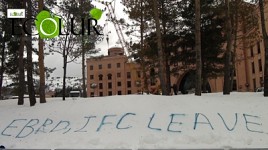 "Amulsar Mine To Kill Jermuk Resort": Protest Demonstration at "Dznemarduk-2015" Festival (Photos)
From 20 to 22 February "Dznemarduk-2015" festival was held in Jermuk Town, Vayots Dzor Region. Jermuk was covered with snow sculptures, which were made by sculptors and amateur groups. S.O.S Amulsar initiative made a surprise 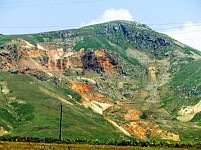 Amulsar: even "responsible" mining is destructive - Dr. Anahid Shirinian-Orlando
Lydian International Limited company, registered in an offshore zone, presented a document entitled "Amulsar Project, November 2014" to Armenians in the Diaspora. This document is superficial, misleading and incomplete. This is what thinks Anahit Shirinian-Orlando, an environmental scientist-engineer living in Los Angeles, who says No to mining at Amulsar