Ministry of Environment Developing Water Permit for Amulsar Mining
the developed WP is intended to carry out water intake of 40.0 l/s water from the Darb River for industrial purposed in the administrative district of Zaritap community, Vayots Dzor Region

Amulsar Project and EBRD Responsibility
International development banks' environmental, social policy, grievance financing mechanisms, and other issues were discussed at a seminar in Georgia on September 24-26

Amulsar Problem in Brussels
On October 1, Anna Shahnazaryan, a member of the Armenian Environmental Front Civil Initiative presented a group of MEPs in Brussels the issue of Amulsar, in particular, the program confirmation by

Motion To Court - To Ban Any Operations in Amulsar by Lydian Armenia as Collateral of Claim
On September 30, Jermuk residents' barrister Nazeli Vardanyan filed a motion to RA Administrative Court to ban Lydian Armenia to carry out any activity in Amulsar before conducting a new biodiversity impact assessment 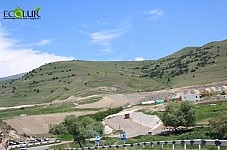 New Information Available Within Criminal Case on Amulsar
“There are new people, there will be, the former may be questioned again. There are others planned to be questioned, the need has just begun. There is no word on closing the case. The preliminary investigation continues. "

Inadequate Punitive Actions and Selected Justice Exercised Towards Jermuk Residents Involved in Combating Amulsar
In the cases outlined below, the RA Police has taken and continues to apply disproportionate measures against Jermuk residents opposed to the Amulsar project, which may be qualified as political persecution

We should follow the truth and be honest in Amulsar issue, says Pashinyan
In order to make a decision on the Amulsar issue Armenian Prime Minister Nikol Pashinyan says it’s necessary to de facto and de jure get a response to one question – whether the operation of the mine is an ecological disaster or not

Lesson and Job Strike in Jermuk for Amulsar and To Save Jermuk Mineral Water Resort Town
Today, students have gone to school without bags and textbooks, bringing flags and posters with Amulsar instead

Environmental Mobilization Day on 20 September: Events and March: AEF
We call on groups and organizations to self-organize and fill public spaces with events and protests and in YEREVAN JOIN AT THE END OF THE DAY, at 18:30 to the March for Amulsar to be convened from near the Opera, statue of Aram Khachaturyan

WWF Armenia Applying to Armenian Government Demanding to Annul EIA Issued to Amulsar
Amulsar gold-bearing quartzite mine is located in one of the most important biodiversity areas including Important Bird Area (IBA), Emerald Site and Key Biodiversity Area (KBA). It is a habitat for more than 25 species of animals and at least two species of plants, listed in the Red Data Book of Armenia