World Celebrating Earth Day on April 22
The main themes of Earth Day this year are biodiversity restoration, climate change and the fight against coronavirus

Damage of Over 4 Million AMD Caused to Environment
RA Nature Protection and Mining Inspection Body recorded 17 cases in the period from 29 March to 2 April 2021, which estimated to cause damage to the environment in the amount of 4,304,120 AMD for 16 cases

32,000 USD Needed to Establish Ecoworld in Armash
Tigran Matjosyan, President of "Armash Rural Community Support and Development Center" NGO, has initiated fundraising on Facebook to create an eco-world near the artificial lakes of Armash, Ararat Region 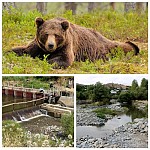 Whether SHPPs Are Reason for Frequent Attacks of Bears on Communities Located on Banks of Yeghegis River?
The bears are approaching other communities near Yeghegis without any fear, damaging households and the farms

April 1 - International Day of Birds
International Migratory Bird Day is marked as an environmental holiday on 1 April, which aims to preserve the number and diversity of birds

Second Stage of Industrial Whitefish Fishing Launched In Parallel with Reduction in Whitefish Reserves
The second phase of the industrial whitefish fishing project officially starts on March 25. It should be noted that before that, whitefish fishing continued, albeit illegally, and whitefish is sold freely in Yerevan markets

Damage of Over 26 Million AMD Caused to Environment
RA Nature Protection and Mining Inspection Body recorded 46 cases in the period from 22 to 26 February 2021, which estimated to cause damage to the environment in the amount of 26,461,532 AMD for 24 cases

Whitefish Stocks in Lake Sevan Reduced
According to the estimates by Scientific Center of Zoology and Hydroecology of NAS RA in 2020, the total whitefish stock in Lake Sevan constituted 2345 tons, out of which the industrial stock made up 586 tons

Damage of Over 18 Million AMD Caused to Environment
RA Nature Protection and Mining Inspection Body recorded 40 cases in the period from 8 to 12 January 2021, which estimated to cause damage to the environment in the amount of 18,296,950 in terms of 39 cases

Armenian PM Got Acquainted with Environment Ministry Projects
The Minister noted that the first stage of the Lake Sevan industrial fish breeding project has been completed. Drastic measures were taken to prevent illegal fishing, resulting in about 75-80% reduction in fish theft

Ararat Regional Prosecutor's Office Detected 41 Arbitrary Fish Farming Structures in Ararat Region
According to Article 188 of RA Civil Code, 41 out of 131 non-operating fish farms existing in the territory of 12 communities of Ararat Region are voluntary constructions or have such in the fish farming areas