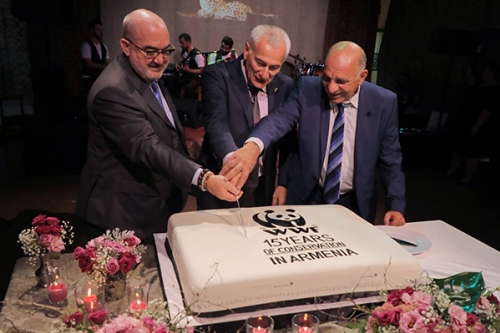 WWF-Armenia had prepared films which covered the projects carried out by the organization on wildlife, forest preservation, the establishment of biocorridors and project implemented in the communities.

'15 years ago, when we started our activities in Armenia, there was not even a trace of the Caucasian Leopard. The WWF put an aim to return these species into the region: currently, we have 9 leopards in Armenia and this is all, first of all, to the enhancement of specifically protected areas of nature. Not only the number of leopards has increased, but also that of other species, for example, the number of bezoar goats has doubled getting 3000 from 1500. All these witnesses that huge work has been carried out,' WWF Armenia Director Karen Manvelyan said.

Artsvik Minasyan – Minister for Economic Development and Investments, awarded WWF Armenia Director Karen Manvelyan with a gold medal of the ministry for the efficient environmental activities by WWF Armenia carried out in the course of 15 years.

During this event, Yerevan State Pantomime Theatre performed a play 'Living in harmony with Nature'.