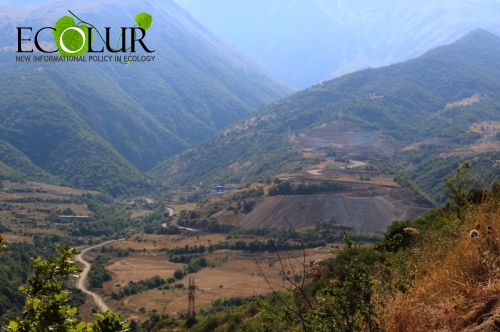 After the optimization of the communities, 15 residential areas were united into Meghri community with a population of 11724 people. The main operating business entity is Agarak copper and molybdenum combine hiring over 100 employees. Russian “Polymetal” company develops Litchqvaz Tey gold mine. Litchq copper mine development by “Tatstone” LLC has been suspended temporarily. “AT Metals” Company has also suspended the development of Meghrasar gold mine. Several other metallic mines are in the stage of exploration.

The five-year-long development program of Meghri expects to have mining bringing economic welfare, with less environmental impact and efficiently managed. At the same time, the community wants to have competitive agricultural products and to develop tourism. The community development program mentions, “80% of the economy belongs to the mining, the activities of people greatly depend on the copper, molybdenum, and gold prices in the world market, which can be considered being risky.”

Mining as a huge source of pollution:

- The problem is that the mines are very close to communities and the risk of pollution is huge. 14 mining permits have been issued – Shvanidzor, Taghamir, Khdebants etc. Agarak and Litchqvaz Tey mines are being developed: Litchqvaz is developed in a closed manner, but its deep water will damage the Meghri River.
In just several days we collected 300 signatures against Litchq mine: the mine is in the sanitary zone of the Meghri River – the drinking and irrigation water of Meghri community is in the surroundings of this mine.
We don’t want mining at all – mining and agriculture can’t be combined.

Litchq mine is the top risky project for Meghri. If the revolution didn’t happen, the damage would be disastrous, while the population was already in a panic. How can a mine be developed on the drinking water? “Tatstone” company was issued more mining permits near Aygedzor and Vardanidzor. 14 geoprospecting permits have been issued for our region.
When Terterasar gold mine was developed in Tghkut 10 years ago, the fish and frogs entirely disappeared in the Meghri River. The tailing dump is still open, it’s not closed, derelict. When it rains, the water gets absorbed into the Meghri River.
The next one is Tashtun mine, which contains dispersed radioactive metals. Even now yellow water flows into the Meghri River from the mine area.

- SHPPs generate irrigation problems. We don’t have any fish in the river because of the operating SHPPs. Nobody controls whether or not there is environmental flow left in the river.

3 SHPPs have been constructed, but the environmental flow is not ensured: fish and frogs have disappeared, while frogs are a kind of water filter.

- The residential areas of Meghri Community located near the Araks River experience a lack of water – Kartchevan, Agarak, Alvanq, Shvanidzor and Nrnadzor. In 2016 the irrigation water gravity irrigation system was introduced in Meghri. The water is not sufficient in the active irrigation season – from July to September, which generates the concerns of the villagers.
Meghri town has the most number of irrigable land areas in the community – 230 ha. Kartchevan doesn’t make use of this gravity system at all, moreover, a part of Kartchevan villagers irrigate their land lots with drinking water and then pay at drinking water tariffs.

- Gravity irrigation is a semi-efficient project, which is aimed at irrigating the land areas of special people. Villagers pay, but they don’t get water, while some people water 10 times. Meghri town is in the anti-sanitary situation, the town sewage flows into the Meghri River.
Alik Tumanyan, Administrative Head of Shvanidzor residential area

- We couldn’t use the water of the Meghri River starting from mid-June, July, and August last year, so we started using pumps. In case of a reservoir, if it is gravity irrigation, we will escape using the Araks River. The same problem is in Nrnadzor and Alvanq.
Shvanidzor residents
- We pay the same price for pumps and gravity irrigation.

Heating in Meghri: there is a gas pipeline, but there is no gas.

- Iran-Armenia gas pipeline runs through Meghri, but we don’t have gas supply. The Islamic Republic of Iran built the entire network and paid for it, while Gasprom Armenia doesn’t switch on the gas. Last year there was legal wood brought from Kapan forests for sale, but this year even it is not allowed.

- We should think of alternative energy, it’s the time to use solar energy.
On revolution