Solar Station Operated in Vayq To Ensure Around 80 Percent of Energy Saving fro Community Structures
A solar photovoltaic power station of 43 kW has been put into operation in Vayq community, Vayots Dzor Region

Compulsory Energy Efficiency Criteria to Be established for Energy-Efficient Commodities
On the sitting on December 5, the Government of the Republic of Armenia adopted the Draft Law on Amendments and Supplements to RA Law on Energy Efficiency and Renewable Energy, which

"Sevan Is of More Priority for Us than SHPP Operation": Environment Ministry
Water use permits issued to small HPPs on the Yeghegis River will be revised if the Ministry of Environment approves the Water Committee's project on transferring Arpa and Yeghegis river water to Lake Sevan and allocating it to the Vayq irrigation system

Armenia To Refuse from Imported Energy Carriers by 10% Due to Solar Stations To Be Constructed
By 2024, 300-400 MW solar power plants will be built in Armenia

ANPP Second Power Unit Modernization Works To Continue Still for Two Years
RA Deputy Minister of Territorial Administration and Infrastructures Hakob Vardanyan stated that the works on ANPP re-equipment which should have been completed on December 31, 2019, will not end based on 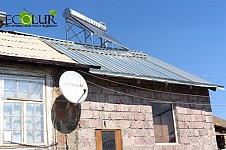 300 Days out of 360 Sunny: Energy Potential in Areguni Remains Unused
“The village has great potential for energy resources. We have plots. We have a good mountain, which is an extraordinary solar power station. This mountain is a great resource. The only problem is that investors shall know about it. Energy development will also create jobs,”

Two Officials Pressed Charges With Embezzling 338 Million AMD at “High-Voltage Electric Networks”
The power transformer T-5 TRDN 40000/110/10 with a gross balance amount of 338,120,370 AMD was stolen through the embezzlement

If Fraud Committed, Victim Is Consumer Resident: Expert Aram Gabrielyan on Jradzor SHPP Case
The project envisages imposing a fine of 1 million AMD on ANI OJSC and securing 400 million AMD of damages caused by the company to ENA