Works on Restoring Green Zone and Cultural Environment Adjacent to Opera Theatre in Progress
on 14 March, the works on dismantling the structures near Yerevan Opera House, including that of illegal structures will resume

6 Persons Arrested within Criminal Case on Abuses in Stepanavan Forestry
Particularly, it was found out that in several sections of Stepanavan forestry about 191 trees of different types and size were illegally cut down causing the state damage of 11.877.000 AMD 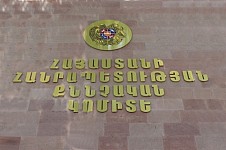 Hrazdan Branch Director of "ArmForest" SNCO Arrested
On March 4, 2019 the director of Hrazdan branch of “ArmForest” SNCO was arrested on suspicion of squandering in particularly large amount and getting bribe in large amount

Damage of Over 29 Million AMD Caused to Environment
RA Nature Protection and Soil Inspection Body detected 47 violations as a result of their inspections, visits, accepted reports from 18 to 22 February 2019, while the damage caused to

First-Time Video of Leopard Taken by People in Armenia

Rangers from Arpa Protected Landscape of Vayots Dzor spotted the Caucasian Leopard during their regular observation and made a video of him, as WWF Armenia informs

Statement: Considering Operation of Any Metallic Mine in Tavush Region Unacceptable
“Tavush without Mine” Initiative Group has disseminated a statement, where it call the citizens to hinder the public hearings of the geological prospecting of Vazashen gold-polymetallic minefield on 27 February

Damage of Over 145 Million AMD Because of Illegal Felling
In the mentioned time period 997,365 AMD was credited to the state budget.

Chambarak Forestry Enterprise Arrested
Pursuant to initial data, from July 1, 2015 to August 3, 2018 in several sections of “Chambarak” forestry of “Hayantar” SNCO 504 trees of different types and calibers were illegally cut down causing the state damage in particularly large amount of 85.749.000 AMD

Damage of Over 24 Million Caused to Environment
In the mentioned time period 2,477,198 AMD was credited to the state budget

Forest Trees Planted Under Teghout Reforestation Plan Exposed to Heat
3-4-year-old trees were exposed to heat on 14 February a result of the fire having penetrated into the area of 9 ha out of 20.8 ha where forest cultures have been planted in the frames

Damage of Over 54 Million Caused to Environment
In the mentioned time period 1,319,020 AMD was credited to the state budget

Paths of Dilijan National Park Mapped
The map of paths enables hitchhikers, tourists to select hiking routes to visit the sightseeing, monuments of culture and nature in the national park

Planned To Make EIA Mandatory for Changing Categories of Forest Areas and SPAN Areas
RA Nature Protection Ministry is proposing to change the category, the target significance of forest areas and the specifically protected areas of nature (SPAN) only after the position opinion of the environmental impact expert assessment