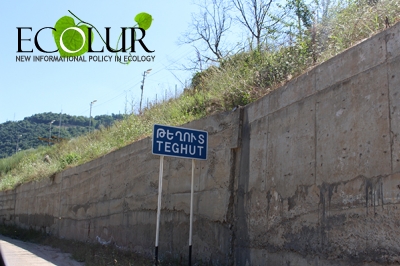 Teghout copper and molybdenum mine has actively been developed by 'Teghout' CSJC for over a year. In reply to EcoLur's question whether the lives of the people changes in Teghout community and what the impact of teghout project is, Teghout residents replied, but asked not to publicise their names. "...If people work at the mine, so they have fears but not such questions as air or water pollution, as they are completely dependent on the enterprise: they don't have any land areas. They don't deal with cattle breeding...Now the company says you may hay the grass: but if mine dust residues on the grass, who will need? We are told there are no environmental problems, but Teghout is an environmental problem by itself. There is turbid water flowing into the river above and we use this water to irrigate their land areas. They result in clay-like residues...We experience problems with dust, especially where heavy machinery operates....They promised to lay gas pipelines, but they didn't keep it...The water pipeline had been laid not by them and we have too little water- it's available only in the evening and at night, but it's cut off since morning...We didn't experience something like that before...' Teghout residents complained. According to the residents, 'Teghout' CJSC reduced not only social programs and working places, but also their salaries explaining this by the current financial situation in the company. On the same day, on 14 July, 'Teghout' CJSC held a meeting with the communities and gave some explanations. Read more about the meeting in the upcoming materials.