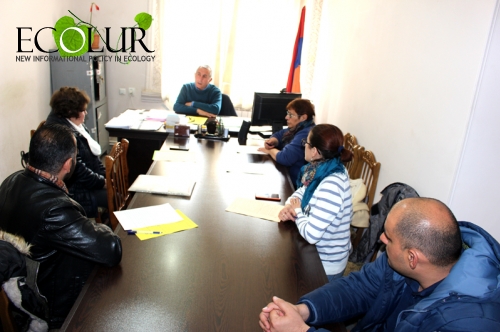 EcoLur continues presenting the series of materials on the residents of impacted residential areas, local active civil society and local government bodies on safety measures related to awareness, preparation in emergencies, and participation in decision-making processes. We are presenting the results of the monitoring carried out in Aratashen community in the ANPP-impacted zone, Armavir Region.

Aratashen community with a population of around 3000 people is located at a distance of 10 km in a direct line.

In Hazardous Zone Without Privileges

Aratashen Community Head Vahram Harutyunyan says they are living in a hazardous zone but they don't have shelters, are not informed and don't have privileges.

'We are residing in the first zone, but we don't have special radiation shelters. There are basements designed for emergencies. There are no awareness-raising posters in the community. In my opinion, the nuclear power plant shall inform the residents about possible dangers, but I haven't seen myself something like that. There is an impression that it is safe by 100% and there is no need to tell us anything.

Many people in the area are sick with cancer and people think the ANPP may be the cause. Why isn't it discussed? For the ANPP not to give us any privileges? If it is like this, let them relocate to another zone to live there in order not to endanger us and other children.

'I am not aware whether or not radiation has ever been measured here. Recently we have been told to allocate an area for the device to measure radiation background, but we haven't still received it. Why hasn't this device been installed for so many years? If they have measured so far, why they haven't told us whether the situation is good or bad,' Vahram Harutyunyan noted.

EcoLur visited Aratashen secondary school where evacuation plans were posted on the walls of the corridors. At school we were told that evacuation plans are not sufficient in case of nuclear hazards, 'The most important issue is the issue of bunkers – special shelters, which should be in the community school, culture house and kindergarten. Nevertheless, there are no shelters.'

The ANPP doesn't cover expenses on installing safety signals leaving them on the community. Village Municipality employees and surveyed residents assessed their knowledge of nuclear hazards as insufficient.

How Aratashen Is Irrigated and Heated

The administrative areas of Aratashen community make up 970 ha, out of which 630 ha are cultivated land areas – 50 ha is not irrigated. 'It can be said that we don't have irrigation problems. A part of the resident receives water from Aknalitch via the pumps, while the others receive water from deep wells. The water from Lake Sevan doesn't reach us,'Vahram Harutyunyan said.

'We have a partial sewage system, there are drainage systems at a distance of 2 km from the village, ground water which withdraws drainage,' he added.

During its visit, EcoLur held an information campaign to convey knowledge necessary for protection from radiation. Awareness-raising flyers have been posted in different parts of the community.