EcoLur continues presenting the series of materials on the residents of impacted residential areas, local active civil society and local government bodies on safety measures related to awareness, preparation in emergencies, and participation in decision-making processes.

We are presenting the results of the studies carried out in Mrgashat community in the ANPP-impact zone, Armavir Region.

Mrgashat is located at a distance of 6 km from the ANPP. According to Community Head Gevorg Danielyan, there haven't been any studies carried out on the ANPP impact in the community and don't have any information about safety risks. 'One month ago two people came from Yerevan and said they wanted to install equipment to see how much the ANPP radiation is, whether or not it increases. They asked me whether we will allocate them any place, I answered they could install wherever it is suitable for them. They left and didn't come back,' Gevorg Danielyan said.

In reply to the question where they can shelter in case of a radiation danger, the Community Head said, 'We have basements under the building of the hospital, under the building of the kindergarten, culture house, but they are not equipped, only in the basement of the culture house there is a table, chairs in the basement. We don't have a gas mask, medications, food, nothing.'

According to EcoLur's surveys, there are safety training sessions held in Mrgashat. The training sessions were last carried out in the frames of 'Shant-2018' pan-country military exercise. The surveyed Mrgashat residents mentioned that it is highly desirable for the schoolchildren to be provided with general information about the nuclear power plant and its safety, self-defense in case of accidents in form of extracurricular activities and to organize thematic courses for the residents once or twice a year.

Nevertheless, Community Head, School Director and individual residents assessed their own level of awareness of nuclear danger as 'average'.

There are no posters designed for the population guiding on nuclear safety in the community. In case of a nuclear danger, there is no population evacuation plan in the municipality building and window cases in the streets. In reply to the question why there are no posters in the visible places, the community head said, 'They are in the safe: if I post them on the walls, the half of the village will leave.' He noted that the legal acts on the ANPP are not discussed with the municipality, while it is highly desirable.

The evacuation plans designed for schoolchildren and school staff were posted on the walls in the corridors of Mrgashat public school № 1. The headmaster showed the sports hall of the school mentioning that the whole school shall shelter here in case of emergencies. Nevertheless, the hall doesn't have a functional significance of a shelter, moreover, it was humid and not repaired.

Mrgahsat has 6600 residents, out of which around 25 work at the ANPP. According to Community Head, there is a dynamics in the population growth: birth rate has reached 85-90 out of 45. 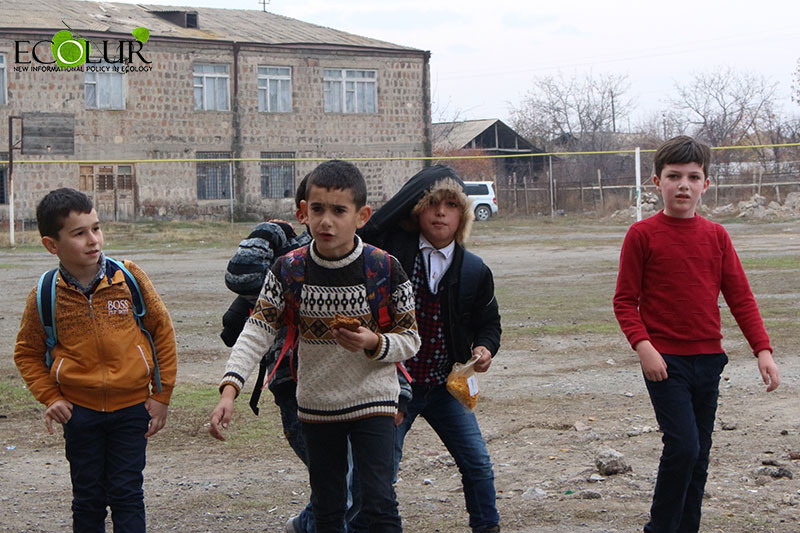 The residents mainly deal with gardening, growing vegetables and cattle breeding. Nevertheless, the irrigation water is not sufficient for all agricultural needs.

'There are 23 deep wells for the irrigation and only one for drinking. Water horizons have lowered over 3 meters. I own 120 ha of arid land areas: the main stream, water from the Aras, flows through 30 villages, but we are the last village and it doesn't reach us. It's been 15 years since we have been requesting to drill out a new well and to give water to the people,' Gevorg Danielyan said.

He outlined that many agricultural crops have stopped growing in the village. 'Before the ANPP, different crops used to grow here: as soon as the ANPP was operated, many crops don't grow here anymore – watermelon gets covered with ulcers.'