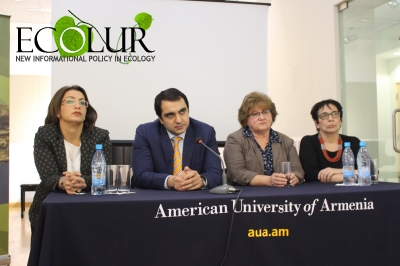 According to Hayk Harutyunyan, Energy and Natural Resources Deputy Minister, the state of the energy sector in Armenia is balanced.  Under him, the energy consumption is planned to reduce by 30%. 'It's a huge figure and will change all the rules in energy  market...' the deputy minister mentioned. He says Armenia produced energy four times more than it can consume. 'It means that extra capacities are a burden for us, that's why we want to establish ties with Georgia and Iran to export them.'
The deputy minister attached much attention to diversification as one of the cornerstones of energy sytem. 'Currently we are implementing a wide-scale program – Iran-Georgia-Armenia, which will enable to export huge amounts of electricity. Our cornerstone is electricity efficiency, which means we should use them renewable energy resources of Armenia.'

Criminal Case Instigated: Buildings Owned by Ex Police Head Constructed Below Absolute Mark of 1905 on Lake Sevan Shore
Amendments Made to Draft on Industrial Fishing of Whitefish in Lake Sevan
Violation in Argitchi SHPP: Damage of 168,840 AMD Caused to Environment
License of Security Company Hired by Lydian Armenia Suspended
Around 280,000 Young Fish Let Out Into Kartchaghbyur and Masrik Rivers