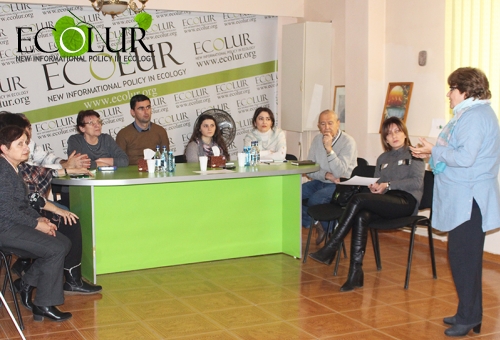 Armenia needs to confirm a concept paper and strategy on nuclear energy safety: this proposal was made by all the participants of the roundtable entitled 'Nuclear Energy in Armenia: Risks, Responsibility, and Safety'.

'EcoLur' Informational NGO President Inga Zarafyan presented 'Nuclear Energy in Armenia: Risks, Responsibility and Safety' study prepared by EcoLur. This study is based on such matter as the Armenian Nuclear Power Plant (ANPP) and related safety, operation and spent nuclear fuel, burial of radioactive wastes, the safety of relevant infrastructures, as well as responsibility for ensuring safety measures. This study is placed on www.ecolur.org . (http://ecolur.org/files/uploads/pdf/ANPP,%20EcoLur10112017/briefpolicyengnew.pdf)
According to 'Association of Young Engineers' NGO President Hovhannes Karapetyan, ANPP radioactive wastes can't be kept in the territory of Armenia taking into consideration the small space of the country and its dense population. Under him, the ANPP should be operated, but it should be operated literately. 'The nuclear power plant is one of the bodies producing the cheapest electricity for us. If we pass on to solar energy, our system can undergo shocks. In this case, the daytime tariff may become 100 AMD instead of 44.98 AMD, as the solar energy is more expensive. We shouldn't expose our energetic system to shocks, as the economic state of our country, in this case, will deteriorate. I support the further safe operation of the nuclear power plant taking into consideration all the risks,' Hovhannes Karapetyan said.

'Union of Public Defenders' NGO Executive Director Aram Grigoryan thinks it's very important to determine ANPP-impacted communities, 'Becoming an impacted community is not an end in itself: it's a matter of right. Communities shall receive a status in order to be able to protect their rights in future, and to compensate damage caused by the operation of the nuclear power plant.'

'The nuclear power plant is one of the most important target bodies as a source of energy. We should act in a way so as to have its correct operation and to have information available for the civil society,' 'Armavir Territorial Development Center' NGO President Naira Araqelyan noted.

Margarita Sedrakyan, Director of 'Metsamor of Hope' NGO, noted that the state should focus its attention on the carcinogenic diseases in the impacted communities and carry out medical checkup.

The participants of the roundtable approved the proposals presented in 'Nuclear Energy in Armenia: Risks, Responsibility and Safety' study. A decision was reached to develop and submit a concept paper and strategy on nuclear energy safety to the Armenian government.