Grants Received by Armenian NPP
Besides this 160 million USD, works for extension of design operation period of the second power unit of the Armenian NPP are being implemented within the framework of Russian-Armenian cooperation with 270 million USD export loan provided by Russia and 30 million USD grant provided by 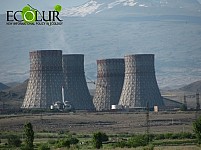 'Rusatom Service' Company Director Presented Actions Progress To Be Implemented with Second Power Unit Lifetime Extension Program for 2017
A regular working consultation has been held at ANPP headed by Ashot Manukyan, Minister for Energy Infrastructures and Natural Resources, where the representatives of 'Rosatom' state corporation have also taken part in headed by Chief Executive Officer Alexey Likhachov and

Around 69 Million USD Saved in ANPP Second Power Unit Lifetime Extention Works
The two thirds of the works planned within the ANPP second power unit lifetime extension and modernization are about to be accomplished, while only US $136 million has been spent instead of

No Investors Found for Construction of ANPP New Power Unit
Currently there is no investor for the construction of new power unit for the ANPP, said Deputy Minister for Energy Infrastructures and Natural Resources Hayk Harutyunyan in reply

"Free Democrats" Promising To Ban Mining by Offshore Companies
"Free Democrats" party taking part in the parliamentary elections promises to ban mining in Armenia by offshore companies. In its election programme the section on the mining, nuclear energy and environmental protection

ANPP Second Power Unit Lifetime Extension Works To Be Accomplished in 2019
The works on the extension of the second power unit lifetime of the ANPP will be accomplished in 2019, as Movses Vardanyan, Director General of 'Armenian Nuclear Power Station' CJSC,

Measures Aimed At Increasing ANPP Radiation Safety Level Planned To Be Taken in 2017
2017 it's planned to carry out projecting of modernization of power unit equipment, systems and buildings, estimated justification of residual reserves of equipment, measures aimed at increasing radiation safety

What To Expect for Armenian Nuclear Power Station, If New Power Unit Not Constructed?
The plan-schedule of new nuclear power unit in Armenia will be developed by September 2017, as the action plan of the Armenian Government says confirmed on 12 January 2017. The launch of new power unit development