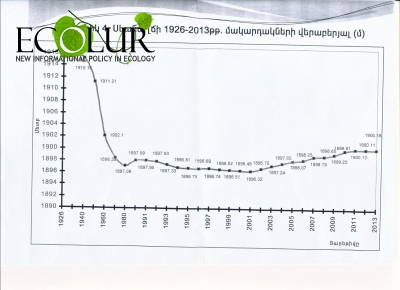 The Armenian Government is promoting not the increase in Lake Sevan level, but its decrease. Irregardless of the irrigation needs, the government is increasing water outlets from Lake Sevan trying not to touch the level of 1900 meters.

The diagram showing the fluctuations in Lake Sevan level from 1926 to 2013 show it. Thus, after adopting RA Law “On Lake Sevan” in 2001, the level of Sevan was fixed at 1896.32 above the sea level and started steadily increasing. The annual growth reached high marks, 44 cm and sometimes 55 cm. In 2008 the government increased the water outlets up to 304 million cubic meters substantiating this with drought signs. As a result, the level increase slowed down and made up only 6 cm. In the following years, maximum set volumes were let out of the lake – 170 million cubic meters. In 2011 the level again went up and the growth made up 22 cm. Then in 2012 the Government saves the situation and sets additional water outlets despite the law – up to 320 million cubic meters. Reason – incomplete level of water in the reservoirs supplying irrigation water to Ararat Valley. As a result, 303 million cubic meters were let out and the lake level goes down thus generating a negative balance (-2 cm).

In 2013 the lake level again went up to 5 cm, though additional water outlets officially were not recorded.

Having a look at this diagram, we have the following question: why are level fluctuations so high, even when the official outlet volume didn’t exceed 170 million. Studying the currents of the rivers to Sevan don’t provide good explanations. In that case it’s not excluded that water is additionally taken from the lake in circumvention of the set standards.

And now new bill on the water outlets up to 240 million cubic meters are considered for five years. And here nobody doubts that the lake will get dry proved by the government’s refusal to make amendments, due to what the positive balance of the lake will be preserved.

Gndevaz Community Head Alienated Land Areas To His Minor Son Through Auction Causing Over 146 Million AMD Damage to Community
Green News: 250,000 Seedlings Planted in “ArmForest” For Use in 2020
“Zikatar Environmental Center” To Be United with “Reserve Park Complex” SNCO: Environment Ministry Being Optimized