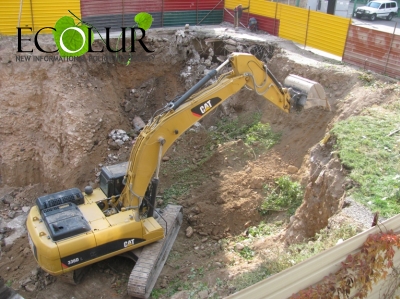 The residents at 24 Amiryan building have already started to protest against the development of their yard, because of which a whole garden has been destroyed. “Yesterday two poplars were cut down; today a big mulberry and newly planted fruit trees were cut down. Here a 14-storey building is planned to be constructed and there is no promise for the trees to be recovered,” said building resident Ani Mandalyan in her interview with EcoLur. Under her, the permit for construction was presented with a behind date. “In August when this permit was presented to us, Mayor Taron Margaryan’s signature was missing, but now we are presented the documents with Mayor’s signature as of March 2013.”

The works are carried out by “Flash” LLC.  When we tried to speak to the company representatives on the spot, they started shouting, “What alarm signal are you speaking about, the residents don’t oppose to this construction and all the questions are solved. Go away, don’t say anything,” Company Director Yasha Khachatryan was shouting.

“This multi-storey building is closing our sun…The Emergency State ministry said that their car won’t be able to enter our yard in any way…That is, if our building is on fire, they can’t save our building….In fact, if an arson is committed in our building, we will lose it…The bases are getting looser, there are cracks in the building, I can’t sleep because of the noise… I don’t allow my children to go out on the balcony because of the dust,” the villagers were complaining. “I can feel only one thing: they want to take off our building,” Ani Mandalyan said.

No arrangement and no discussion with the building residents was held, only after the launch of the construction they proposed to carry out some renovation works. The residents have applied to the barrister and are going to solve this problem legally.