Press Conference at EcoLur Press Club: To What Extent The Cooperation of Armenia and EU Will Be Beneficial in The Context of Eurasian Economic Union (EEU)
The National Assembly discusses the membership agreement of Armenia to the Eurasian Union. The largest public forum opposing to the conclusion of this agreement is the Armenian National Platform of Civil Society Forum of EU

What was Left from Forests in Tavush, Press Conference in EcoLur Press Club
On November 13, the members of Pan-Armenian Environmental Front and Armenian Extreme club discovered a lot of cut trees, violations

What the Milliards Intended for Landscaping in Yerevan Are Spent On
According to the data of “Transparency International” anticorruption center within 1990-2007 green areas in Yerevan decreased about 3 times.

Press conference on the eve of tree planting in Yerevan
On November 8 the City Hall of Yerevan is getting prepared for another tree planting. Whether these activities had a positive result or not, in what condition

What To Do To Have Wolves Fed and Sheep Safe: Press Conference at Press Club
The press conference will be held at 11:00 on 22 October at EcoLur Press Club

Vegan Festival Promises Tasty Organic Food and Good Leisure
On 11 October Vegan Fest Yerevan 2014 will be held on Mashtots Street (next to Margaryan Hospital) and will begin at 1 PM and go through the evening. This vegetarian

What Is Expected to Aramsh Lakes: Press Conference at EcoLur Press Club
The owners of artificial lakes in Armash, Ararat Region, are drying out the lakes preferring agriculture to fish farming, which results

Miners Spent 22 Million USD in Canada to Save Turtles, Armenia Spent 0 Dram for People's Health
Foreign small and medium mining companies refuse from developing soil in their countries, as it’s too expensive. These companies arrive in Armenia to develop mine demonstrations in Armenia, as mining conditions

Global Warming in Armenia Has Worst Scenario
Under Zaruhi Petrosyan, high temperature in the whole republic continued till the mid of September. In the first ten days, the average temperature was higher by 3 degrees than the standards, in the second ten days it

Weather Abnormalities and Global Warming Already in Armenia: Press Conference at EcoLur Press Club
Abnormal hot and dry weather in Armenia continues: no water, rivers are getting dry. What will this long heatwave replaced with? The world has already

Press Conference at EcoLur: State of Rivers in Armenia
We continuously eye witness how the rivers in Armenia find themselves in disastrous situations. Speedy development of mining 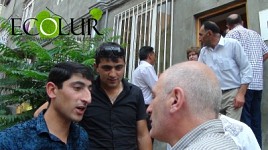 Scientists Proposing To Eliminate Drought Consequences Through Creating Snow Reservoirs
The problem of drought in Armenia is connected with preserving snow cover. As it turns out, snow can be preserved. It's already four years since a group of Armenian scientists have been conducting scientific