317 Kg Sevan Whitefish Confiscated
The Nature Protection Ministry informs that from 11.01 to 29.01.2016 the State Environmental Inspection detected violations during inspections it carried out, which resulted in drawing up 5 decisions 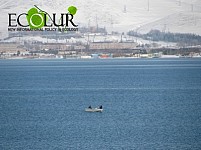 Natural Reproduction of Trout Not Ensured in Lake Sevan
The population of Sevan trout in Lake Sevan keeps on surviving at the expense of the young fish grown in artificial conditions, as

Expert: A Group of People Make Money in Toronto Stock Exchange At Expense of Amulsar Project
Because of its geographical location Amulsar mining project will affect the whole population in Armenia, and not only one residential area, as geographer

In the Future Alternative Fuel to Be Derived for Sevan Residents
Now the wastes originated as a result of cleaning Lake Sevan are stored in the area of "Sevan" national park. In the future it is planned to found recycling plant where the gathered deadwood will be turned into alternative fuel and will somewhat ease the fuel problem of the people in

Trout and Whitefish Species Fishing To Be Stopped in Lake Sevan and Rivers Flowing to Lake Sevan
On 4 November 2015 Nature Protection Minister Aramayis Grigoryan signed his decree No 320-A “On Measures Carried Out in Lake Sevan During Natural Reproduction of Fish”, which particularly says

Water Designed for Lake Sevan Flowing into Hydropower Plants
On 17 October EcoLur’s camera fixed how the water from Arpa-Sevan tunnel flows into the Yeghegis River, where a cascade of SHPPs operate.