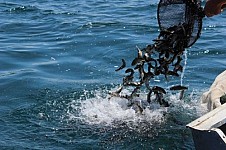 Waste of Over 2 Billion AMD of State Funds – Project of Artificial Breeding of Trout in Lake Sevan: Criminal Case Initiated
The Department for the Protection of State Interests of the Office of the Prosecutor General of Armenia has examined the documents on the financial and economic performance of the Sevan Trout Restoration and Fish Breeding Fund and Sevan Trout and Sevan Aqua CJSC companies established by

What Kind of Projects Implemented for Lake Sevan for 2017 and 2018 with Funds Received from Sale of Electricity: Enquiry to TAI Minister
EcoLur Information NGO has sent an enquiry to the Minister of Territorial Administration and Infrastructure Suren Papikyan to find out what projects have been implemented for Lake Sevan with the funds received from the sale of electricity produced as a result of additional water intake in 2017 and 2018