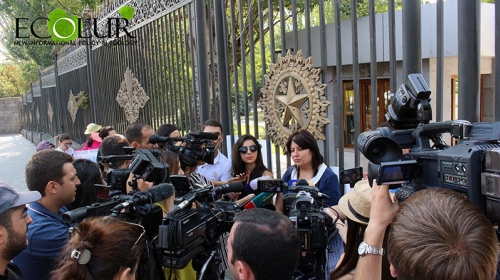 'Tsarukyan' Faction MP Sergey Bagratyan thinks that the substantiations submitted by Water Committee are 'vulnerable and weak'. The need for the additional water intake and the compatibility with the current situation are not proved. 'Sevan says S.O.S and our task is to save it,' the MP said.

'Our work has been criticized, but they continue doing the same,' RPA MP Armen Ashotyan said and noted that the substantiations of the bill were not persuasive. In parallel with the session at the National Assembly, S.O.S Sevan Initiative was conducting a protest demonstration. The environmentalists with posters saying 'Let's Save Sevan', 'Sevan Facing Environmental Heart Attack', 'Water Is Life' were calling for the MPs not to adopt the bill.

'This year we haven't had a positive balance in Lake Sevan, while RA Law 'On Lake Sevan' says that the lake mustn't have a negative balance. We have visited Ararat Region and understood and the problem is in the poor management of the irrigation system,' Inga Zarafyan, President of EcoLur Informational NGO said.

'Do you think the water flows to Ararat Valley for people? No, people complain and say they don't receive any water. Where does Sevan water flow? Here there are energetic interests, big interests. The government must monitor where Sevan water flows to,' Coordinator of Environmental Public Alliance Silva Adamyan said,' We even don't mention about public hearings, but this can't continue. We will continue our fight.'

'It's a gross violation of RA Law on Lake Sevan. It is stated that the lake is in the poor state, the amount of the algae has increased, while Health Ministry informs that water is dangerous for health. In this case, sending such a bill to the National Assembly and deciding to irrigation agricultural land areas with such water is a crime. This water is not useful for use if there are toxic substances in it.

Besides, villagers don't need water in September. It is clear that the water will be used for energetic purposes,' Director of 'Forests of Armenia' NGO Nazeli Vardanyan said.

Satik Badeyan, President of Gegharkounik-region-based 'Territorial Development and Research Center', said, 'The social heavy situation of Lake Sevan residents haven't been taken into consideration. Already there are no fish reserves in the lake because of non-expedient exploitation of the lake, and the main the source of people's income is the organization of rest for one month and a half. But, as a matter of act, the lake bloomed and there were no holiday makers.

Arpa-Sevan doesn't work with the whole potential, Vorotan-Arpa tunnel, on which millions had been spent, hasn't transferred any drop of water: we have internal information that the tunnel had been constructed wrongly and it may appear that water won't flow through the tunnel at all.'

Even Under Conditions of Operating Arpa-Sevan Tunnel, Level of Lake Sevan Lower As Compared with Last Year's Level
Whether Public Hearings for Issuing Water Use Permit for 'Narek' SHPP Can Be Considered as Held?
Return to Land Instead of Migrating for Jobs: Irrigation Water Problem in Apaga Is In Settlement Stage