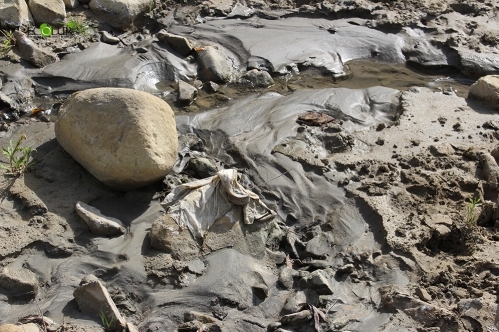 Cracks have emerged in the dam of Teghout tailing reserve, and, as a result, the tails of the tailing dump are flowing into Shnogh and Debed Rivers. The situation is so serious that even the operation of the ore processing combine has been suspended, alarm signals have been beaten in the press and social networks. Teghout mine impacted Shnogh villagers confirmed this information in their interview with EcoLur. Nature Protection and Soil Inspection Body of RA Nature Protection Ministry is currently conducting examinations in the area of Teghout tailing pipe, as Inspection Body Press Secretary Vruyr Pepanyan told EcoLur.
According to Shnogh villager Levon Alikhanyan, the operation in Teghout ore processing combine was suspended on 10 January. Under him, the leaks out of Teghout tailing dump are not accidental. 'The leaks occurred 10 days after the operation of the combine had stopped. I can assume that the company has artificially dumped the tails into the Shnogh Village, which later flow into the Debed River in order to avoid bigger accidents. The tailing dump gets full very quickly and the tails are already dumped into the safety zone designed for accidents. As far as I am aware, the level of the tails in the tailing dump has increased to the extent that the day may not endure any linger. This may turn into a real disaster,' the Shnogh resident said.
EcoLur tried to get any explanations in regard to this situation from 'Teghout' CJSC, where they told us clarifications will be available only upon a written inquiry.