Armenian Forests Endangered: Around 340. 790. 368 AMD Damage Caused to Armenian Flora This Fall
During the three months of autumn 2021, from September 6 to November 26, the damage caused to the environment amounted to 341,903,745 AMD. The majority of this damage equalling to

Over 400 Ha Burnt Down in Arevik National Park. Not Able to Extinguish Disastrous Fire
According to the satellite monitoring conducted by Hydrometereology Monitoring Center on September 20, about 423 hectares were burnt

Fire Broken out in "Arevik" National Park Can't be Extinguished
The RA Ministry of Emergency Situations informs that according to the latest data, about 60 hectares of vegetation burned in the territory of the national park

Citizens Holding Protest Demonstration against Construction in Fizgorodok Being Detained
The RA Police detained activists Garik Miskaryan, Seda Grigoryan and Artyom Sadoyan, who were participating in the action against the construction of a multi-storey building in the territory of the Physics Area (Fizgorodok)

Alarm Signal: "Ratko" LLC Felled Down Trees in Fizgorodok, Police Stopped Company Operation
Fizgorodok residents have been protesting for more than three weeks to prevent the construction of a multi-storey building in their public area

Alarm Signal: No Water in Ayri River for Several Days
There has been no water in the Ayri River for several days now, the residents of Torunik village in Syunik Region are not able to irrigate the gardens

We Condemn Seizure of Area Adjacent to Physics Institute and Exercise of Violent Force by Police
The citizens of Armenia and NGOs condemn the occupation of the area adjacent to the Institute of Physics for the construction of a multi-storey building, the rude behavior and arbitrariness of RA Police towards the participants of the peaceful protests. The disseminated announcement says 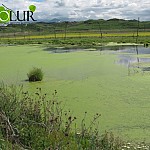 S.O.S. Sevan Initiative Calls on Newly Formed Government and National Assembly
We, the members of S.O.S. Sevan Initiative, call on the members of the newly formed RA Government, the deputies of RA National Assembly to show their will and withdraw the decision on additional omissions from Lake Sevan. On August 6, the Armenian government decided to allow

Public Hearings Organized by "Jin Holding Limited" LLC in Urut Not Held; Company Representative Didn't Attend It
Minutes were drawn up with the participation of local residents and activists gathered in the Urut administrative building that the public hearing did not take place because the company representative did not appear

NABU: 60% of Storks in Ararat Region Polluted
Almost 60% of storks in Ararat region are polluted, as the Armenian branch of the German Society for the Conservation of Nature (NABU) informs