Trees Felled Down: Construction Continued: Again Alarm Signal from Erebuni
'The construction in Erebuni Forest is still going on, while trees have been felled down,' EcoLur has received another alarm signal

Protest Demonstration Near Yerevan Zoo
On 17 November, the current and previous employees of Yerevan Zoo held a protest demonstration near the zoo with the posters 'Ruben, leave' and 'End killing animals

Alarm Signal: Trees Felled Down in Erebuni Forest
An alarm signal has been posted on EcoLur’s “EcoAlarm” webpage that trees are being cut down in Erebuni forest, Yerevan City. “Near the crossroads of Mushakan and Jrashen neighborhoods

Vayq Gold Company Illegally Mined from Azatek Mine Gold, Silver and Copper of 250 Million AMD: Criminal Case Initiated
The information on the illegal mining has been submitted by Chief Prosecutor's Office to RA Environmental and Mining Inspection Body

Very Soon! Public Court on Environmental Crimes
The public undertakes this work – to determine the extent of liability for an environmental crime and to reach a verdict in a Public Court

Open Letter on Amulsar Gold Project to UN High Commissioner for Human Rights and Acting Armenian Premiere
We, the undersigned residents of Jermuk town and Gndevaz village, the environmental activists who have joined us and the civil society representatives who support us, call for your attention 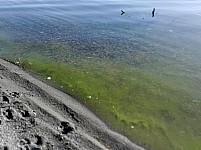 Why Lake Sevan Bloomed Again?
EcoLur has received an 'ecoalarm' on its webpage about Lake Sevan blooming, 'It's already November, but Sevan is again getting green from the sun. They are still seeking to justify the ruthless wasting

Yerevan Resident Not Threatened Any More: Sign in Green Zone Dismantled
Yerevan resident, a nature lover and translator Meri Khachatryan told EcoLur that State Supervision Service had called her and told that the sign installed in the green zone near the 8th building in Mayak

Resident Received Threats for Protection of Green Area in Yerevan
We are addressing this alarm signal to Yerevan Municipality to find out the scope of the powers of 'Jrvezh-1' Condominium, as well

European Study Exposing Toxic E-Waste Chemicals in Children’s Products Spurs Calls for Policy to End Recycling Exemptions for Hazardous Waste
Our research found flame retardants chemicals called PBDEs and HBCDs in overwhelming majority of analysed samples. This is worrying as these two chemicals are among the 28 most

RA General Prosecutor's Office Examining AEF Report on Kechout Reservoir
When analyzing these data a crime is detected, which has been committed for years under the cronyism of highest state levels