MP Called for Accepting Teghout Case As Lesson and Refuse from Amulsar Mining
In her speech at the National Assembly on 6 February, MP from 'Yelq' Faction Mane Tandilyan called for the competent bodies to present exhaustive explanations to the public on the problems of Teghout tailing dump and to refuse from Amulsar mining accepting the case 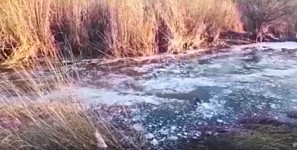 Inspectors Could Not Find Out From Where Foam-Like Mass Flows into Hrazdan River
A foam-like mass is flowing into the Hrazdan river: Facebook user Vahe Avetis took a video of the river covered with foam at 29 Hrazdan, in the area called Ghreri Pos and posted the video on

Monitoring Findings of "V.A.L." SHPP (Photos)
In the frames of "Supporting New Reforms in SHPP Sector through CSO-Government Dialogue" project, the expert group visited "V.A.L." SHPP which is located in the administrative area of

Polluted Water, Toxic Food, Sick Residents: Consequences of Mining in Armenia
Our company mentions that it creates favourable conditions for the investors to come and develop mining, but there are no clear estimated what the economic damage s=is after the operation of mining companies

Armenian Government Granted Privilege to Mining 'ML MINING' LLC For Third Time
On 25 January at its Cabinet meeting, the Armenian Government reached a decision to grant privileges to 'ML Mining' LLC. The equipment worth around 2 billion AMD, as well as their spare parts, raw materials and

Around 4 Million AMD Damage Caused to Environment Within One Week
In the reporting period, the sanction imposed by RA Nature Protection and Soil Inspection Body resulted in crediting 936.500 AMD to the state budget

13 Years After Elimination of Dalma Gardens Ex Dalma Land Users Continue Demanding Their Due Compensations
For already 13 years the ex land users of Dalma Gardens continue their fight for compensation of the land areas they have been deprived of. On 26 January they gathered near the President’s seat with their well-known green posters to remind the Armenian President about their problems connected with the Dalma Gardens

Tumanyan Landslide Activation Reasons Known
The main reasons for the activation of the landslide in Tumanyan Community, Lori region, are groundwater, the water pool located above the landslide, as well as the railway and highway located nearby. The reasons were presented by