Shnogh River will Never Be the Same 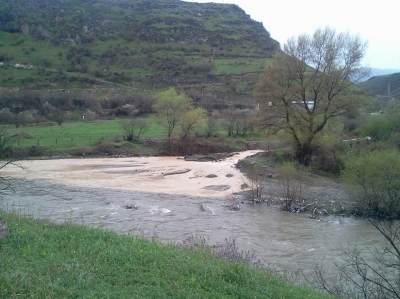 The activities of “Teghut” CJSC, one of the many companies of opaque Vallex Group, illegally exploiting Teghut as a copper mine, continue to have a negative impact on Shnogh river. Photos taken on April 13, 2015 (see below) show that large amounts of eroded soil are flowing into the river from the deforested and open-pit territories. Spring rains are speeding up the process of soil erosion and fill the river not only soil, but also with surfaced mineral rock particles, which already contain plenty of heavy metals.

Mining-related problems regularly arise in Teghut. Back in March, villagers alerted that the tailing dam’s outer fence was damaged, and toxic wastes were leaking (see below).

On January 28th, 2015 Save Teghut Civic Initiative was alerted that Shnogh river is again polluted. Photos of the polluted river were published on our FB page and on the website of the initiative. This time the river was polluted with toxic tailings waste, which is visible in photos even to the naked eye.

Earlier, on January 21st, 2015, during ameeting with Teghut and Shnogh residents the Executive Director of “Teghut” CJSC, Rouben Papoyan acknowledged that they “only once polluted the river with tailing dam waste”, but they only discharge sand and rock wastes into the river and promised to schedule the discharge of these wastes so that villagers are informed when the river will be inappropriate for use. The details of this meeting were reported by Hetq.am, in the article the employers (repeated faces under various posts) of opaque Vallex group claimed that their "miracle" mine works according to “European standards” and they never pollute.

Early closure of Teghut mine will save Armenia from a wide range of imminent disasters.