Shnogh Residents Addressed Letter to OSCE Ambassador in Armenia in Regard with Teghout Mine
Shnogh residents have addressed a letter to Andrey Sorokin – the Head of the OSCE Office in Yerevan in regard with Teghout copper and molybdenum mining project, which says, ““Teghout” CSJC is implementing

Nature Protection Minister's Final Press Conference for 2014: Mining, Part 6
Referring to Amulsar mining project, the journalists asked a question to the Minister to what extent the complaint of Gndevaz villagers is go\rounded, who oppose to the mining project and are going to sue. In reply, the Minister said

Whether Trumpets To Turn into Court Proceedings for Teghout?
The pompous events dedicated to the commissioning of Teghout mining complex on 20 December were marked with the visit of top officials of Armenia and Atrsakh. Armenian President Serzh Sargsyan and

Honey Vs Mine: Alternative is REAL
On 7 September 2013 “Teghout Support” civic initiative held a fair of honey and other goods in Shnogh community, Lori Region. The main aim of the fair was to show that the factual development of Teghout is connected not with destructive mining, but sustainable development

Lalvar Nature Before Teghut Project and Now (Photos)
We are presenting the photos before the launch of Teghut project, during its launch and the photos made by ‘Vallex’ Group, when all the project

Teghut Mine Still Not Developed But Shnogh River in Disastrous Situation
Under the data by “Environmental Impact Monitoring Center” of Nature Protection Minister, the pollution of the Shnogh River, Lori region, is classified under

Vallex Group invests $320 million in exploration and development of Teghout deposit in Armenia
Teghout CJSC has been created to engage in exploitation of the Teghout deposit. The company will launch activity by the end of the year. 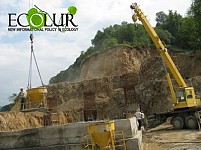 RA Government to Receive A Negative Decision from Aarhus Convention Compliance Committee Third Time
The fifth session of the meeting of the parties to the Aaurhus Convention took place in Maastricht, Netherlands 29 June-4 July 2014, where Armenia’s failure to comply with the Aarhus Convention and

Teghout Supporters: Teghout Won't Become a Mine: Doesn't Matter Through Peace or War
On 26 June the Teghout supporters have disseminated a vido, which presented the main issue of...

Call for Joining the Statement on Meeting of Aarhus Convention Parties
Since 2004, all the three appeals to the Compliance Committee by the concerned stakeholders of Armenia have been...