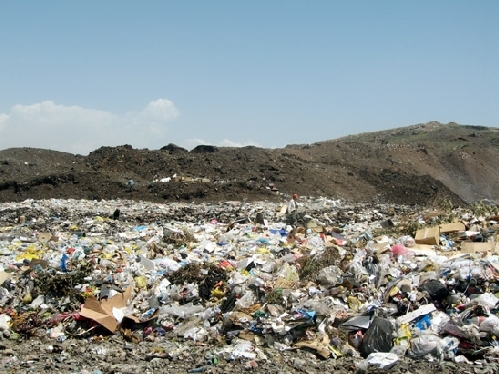 Garbage became one of the main problems in Yerevan and Armenia, in general. Dozens of hectares of useful sites, picturesque gorges, rivers, forests and monuments of nature are dumped with garbage. The world finds up-to-date solutions of utilization of solid household wastes, sorts them and recycles everything possible. Accumulated garbage may serve as source of electricity and brings income.

In Armenia the problem of utilization of solid household wastes is continuously discussed, but it's not solved. Why? In recent years local municipal organs with the approval of the government made their efforts more active towards raising funds for the solution to this problem. The European Bank for Reconstruction and Development (EBRD) allots loans for different programs on the management of solid household wastes with co-funding of the government and other European financial organizations. To what extent the proposals to these organizations comply with contemporary requirements to the utilization of solid household wastes, where some of them already was granted funding, while the others are in the process of consideration.

The EBRD is providing a sovereign loan of up to EUR 8 million to the Republic of Armenia for lending to the Yerevan landfill management company (the company), a special purpose company wholly owned by the city of Yerevan (the city).

The Bank's loan will be co-financed by a EUR 8 million loan from the European Investment Bank ('EIB') and will be complemented by a capital grant of up to EUR 8 million provided by the EU Neighbourhood Investment Facility ('NIF').

The project will result in significant improvements with regard to the quality of solid waste management services in the City; improvements to public health by reducing the vectors (rats, dogs and insects) that can spread disease; elimination of current underground fires; and reduction in noise and odours. The project will result in the subsequent closure of the current dumpsite maintained by the City, which will result in significant benefits not only for public and worker health and safety, but also for the environment. The existing dumpsite will be closed with surface sealing financed under the proposed project and additional measures to be financed by EIB under a separate arrangement. During the preparation of the National Solid Waste Strategy, waste sorting facilities were considered as an option. Due to affordability constraints, these were not included in the Strategy. Regional sanitary landfills were selected as the most cost-efficient waste management option considering the current conditions in Armenia. Based on this solution, EBRD has been approached for the financing of the construction and operation of an EU compliant landfill in the City and the project has been structured to meet the relevant EU landfill requirements (Directive 1999/31/EC on the landfilling of waste). However, EU requirements related to waste sorting and recycling cannot be applied at the level of the project and this is considered to be outside the influence of the project under consideration. The landfill will have a liner system for protecting soil, surface water and groundwater from leachate and subsequent contamination. The leachate will be collected and recirculated to the landfill. Landfill gas will be collected and flared. To prevent surface water from being polluted, the current leachate stream from the dumpsite will be collected in the leachate reservoir. The contaminated soil of this leachate stream bed will be removed, temporarily stored and finally deposited in the new landfill when operations start.
In regard with this project there are many question rising on the expediency of the project and measures on waste utilization. We will come back to assessments later in the series of materials dedicated to Nubarashen landfill site and a related project, a partially implemented project by Japanese companies, clean development mechanisms and others.