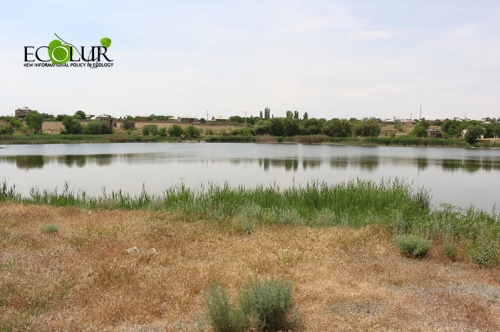 Taronik Community, Armavir Region, which used to be famous for its water reserves and the ANPP used to carry out water intake here, is currently experiencing drinking and irrigation water problems. Gushing wells have dried out and the water horizon has decreased. Taronik residents are conditioning the water problem with the fish farms operating in Ararat Valley which mine too much water.

“In the past, we used to have 60 gushing wells – the springs have already dried out. Larger wells have been drilled out in Ararat area with dozens of times more productivity, as a result, our water went low,” the residents outlined.

Taronik Community is served by “Armavir” WUC providing irrigation water from Aknalitch and deep wells. Aknalitch water irrigates land areas in Taronik, Aratashen and Arshaluys. EcoLur’s camera fixed that already in May the level of Aknalitch is low and it may not be sufficient to meet the demand for irrigation water of 3 communities in the irrigation season. The other problem is that in Taronik the water is supplied to villagers through irrigation brooks with soil beds and the land areas located far from the aqueduct don’t get any water, for this reason, some villagers don’t cultivate their land areas.

“Whosever land is next to the aqueduct and receives the water first, why should s/he complain? My land area is the farthest one and it doesn’t get any water: how shall I cultivate it?” Taronik residents complained. In their conversation with EcoLur, Taronik residents noted that the problems with irrigation water are also due to insufficiency of water after the irrigation by large landowners.

30-40% of the personal plots, according to the employees of Taronik Community Municipality, have greenhouses irrigated by wells located in the personal plots mainly in a drip manner. As EcoLur surveys showed that deep wells drilled out in the community don’t have water meters and water expense is not calculated only the electricity used for the operation of pumps is calculated.

Another reason for not developing the land area is the lack of finances: “The residents are under loans: there is no money for plow, no money to buy seed grains. The income has decreased – our land areas are classified as category 5. We need 10-12 physical workers to cultivate one ha of land area as the physical force of the villagers won’t be enough. The landowner shall daily pay 5000 AMD to the workers: in the fall, they don’t have that much money in order to pay the workers,” Mkhitar Avagyan, Leading Specialist at Taronik Community Staff, noted.

According to the employees of Taronik Community Municipality, 55 ha out of 300 cultivable land areas in Taronik are not cultivated, while according to the five-year development plan of Taronik Community, the agricultural land areas in the community make up 813 ha.
Besides the agricultural land areas related to the irrigation, Taronik also has a problem with the drinking water since 2005 conditioned with drying-out of gushing wells. For over 10 years, people have been bringing drinking water from Arshaluys or Yerevan. The residents have drilled wells 5-20 meters deep in their yards, most of them have dried out, while those operating can’t supply quality water.

Taronik Community Municipality, with the support of “Organization of Saints of Last Days” has carried out the construction of 6-kilometer-long drinking water pipeline in the community. According to community municipality employees, an 85-meter-deep well has been drilled out which ensures water via a pipeline to 20-30% of the community. “The village also needs constructing a 6-kilometer-long pipeline to ensure the entire village with drinking water,” said Mkhitar Avagyan, Leading Specialist at Taronik Community Staff.