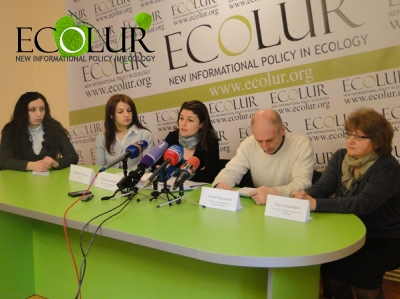 Reminder: on 15 March the Nature Protection Ministry organized the public hearings of “Khachaghbyur-2” SHP, where the journalists and villagers were not allowed to take part in the discussion of the SHP construction project.

“By banning significant public representatives, mass media and villagers to take part in the public hearings the Nature Protection Ministry has committed a gross violation of the law and has violated the public participation provisions of the Aarhus Convention, which should ensure publicity,” Lawyer Meri Khachatryan said. Under, the inspiring and thankful speeches made at the public hearings didn’t refer to the public hearings in any way, while the decision on the SHP construction was confirmed only by 4 Aldermen’s Council representatives out of 7 members.

“The community had reserved the right to announce on behalf of 5 people, that Getahovit villagers give their consent. This is just ridiculous and we are going to present our specialized grounds and objections after these hearings,” Khachatryan mentioned.

Levon Galstyan added that the attendees didn’t ask any specialized questions, while they questions they raised didn’t receive their answers.

“I think it’s already clear that the initiating company didn’t have the answers to the specialized questions. They spoke about the nuclear power plant, hard social situation in the country, but they forgot about environment, i.e. it was organized to consider the public hearings as passed specialized hearings,” Levon Galstyan said.

He mentioned that the new project for SHP mentions that 141 trees should be cut down, but how they decided the number of trees to be cut down is not clear.

'This information is not reliable, as the length of pipes mentioned in the project is 2.5 km, but under our estimates it makes 3 km, a part of which runs through a dense forest. If a five-meter-wide road should be laid in a dense forest, it becomes clear more than 141 trees should be chopped down,' Levon Galstyan mentioned.

He also mentioned that the hearings had already been held on 6 December in Getahovit Village, where 99% of the population opposed to it, but during these hearings it turned out they didn’t oppose to it so sternly. 'This is done through intimidations,' Levon Galstyan said.

Journalist Tehmine Yenoqyan also expressed her opinion, 'When journalists were not allowed to enter the hall, I sent the camera together with Meri and Levon to the hall of public hearings. You can watch the video on Youtube entitled 'Getahovit: Behind Closed Doors'. You can make sure whatever Levon and Meri spoke about is true,' Tehmine said.  She also touched upon the contest for the position of 'Khosrov Forest' State Reserve Director, where the journalists were also not allowed to take part in the contest. The journalist mentioned about unlawful actions there as well.

Inga Zarafyan mentioned that public hearings are open discussions, while Nature Protection Ministry held it at a building, which has special entry regime with special documents, which is already a violation of the law. She also expressed her dissatisfaction with the decision that the attendees can follow the process of the hearings in lifestream.

'We think that participation in the public hearings and following them are completely following things: if the Ministry thinks that it's a kind of participation, we advise Nature Protection Minister and other ministry officials not to waste additional funds from the state budget and to take part in all international conferences and forums in livestream regime. We are going to apply to the Aarhus Compliance Committee, as we think that the second part of the convention, which refers to the public participation in environmentally important decisions has completely been violated,' Inga Zarafyan mentioned.