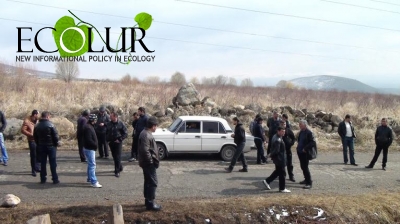 The residents of seven villages in Aragatsotn Region – Oushi, Ohanavan, Artashavan, Saghmosavan, Yeghvard, Yerznka, blocked Yerevan-Aparan highway. The residents are demanding to stop the construction of the SHPP on Aparan-Yerevan canal. Environmental activists, civic activists and MP Lyova Khachatryan were on the scene, while policemen then joined them. In the telephone conversation with EcoLur the local villagers confirmed that the police were intimidating them, but so far nobody has been detained.
It should also be mentioned that Aragatsotn Regional Head Sargis Sahakyan recently had a meeting with Ohanavan and Karbi villagers and said that the SHPP wouldn’t be constructed. Nevertheless, the villagers are sure they are deceived, as the construction of the irrigation system has already been launched.
This material  was made possible through the full support of Open Society Foundations – Armenia’s Policy Fellowship Program Initiative, grant number 18571. Ideas, thoughts, and arguments presented in the paper are the sole expression of the author’s views and do not reflect those of Open Society Assistance Foundations – Armenia.

WE REMEMBER AND DEMAND
Local Population Started Defending Its Rights without Any Intervention: Achievement of 2019
Press Conference on 2019 - Year of Environmental Activity
German Journalists Presented Environmental Problems in Armenia
Society Concerned with Blooming in Lake Sevan Raised Proposals Aimed at Saving the Lake