The Akhtala River has got polluted again, as Oleg Dulgaryan, Director of Community Mobilizaton and Support Center NGO, is beating an alarm signa

As part of USAID “Participatory Utilization and Resource Efficiency of Water" project, a series of social videos entitled "Find Your Way to Save Water"

To recognize the damage to the ecosystem of the Astghadzor River and its impact on Lake Sevan, which contributed to the deterioration of the socio-economic situation of the residents of Astghadzor Community, as an environmental crime

Apaga Village Left without Water When Raining
Today, the village's water resources have been depleted, making it more expensive for residents to use water pumps that run on electricity. As a result of the lowering of groundwater levels

RA Prime Minister's Reflection on Use of Natural Resources, Environmental Violations and Forest
In recent months, 11 soil management rights have been terminated, out of which 4 are the rights to operate 4 metal mines

On May 6, 2020, the Voghji River in the Kapan area turned brown, which is due to acid rain in the river during precipitation from the area of ​​the abandoned Kavart mine

7.12 Billion AMD from State Funds with Improper Spending Did’t Prevent Possible Environmental Hazards Causing Severe Consequences
The Prosecutor's Office of the Republic of Armenia has disseminated a statement on improper spending of a large amount of money, which resulted in the severe consequences caused by environmental hazards

Solving Water Problem in Taperakan - On Its Way
The water supply, which has been destroyed for many years due to a broken pipeline and frequent water cuts, will be regulated in the near future 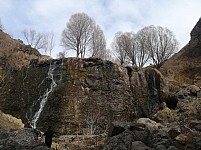 Shaqi Waterfall Again Got Dry?
The Shaki waterfall, which is included in the list of state natural monuments, has almost dried up

Alarm Signal: Tuff Sculpture, Groundwater Spring Being Destroyed and Trees Felled Down on Hrazdan River Bank
Tuff-made sculpture and an underground spring are being destroyed and trees are being felled down in the capital of Yerevan, in the Hrazdan gorge, on the left bank of the river, on the opposite bank of the

Daranak and Kantegh SHPPs Fined for Violations
Environmental and Mining Inspection informs that as a result of the inspection carried out in "Daranak" SHPP owned by "HPP Shin" CJSC operated in Gegharkunik Region, it was found out that the SHPP carried out the water intake without water meter

Lake Sevan Level Higher By 2 Cm As Compared With Last Year's Indicator
As of April 27, 2020, the level of Lake Sevan is 1900.56 m, which is 2 cm higher than the indicator on the same day last year

Illegal Water User Permit Issued to One HPP During Aram Harutyunyan’s Office: Head of Water Use Permit Department Charged
During the office of the former Minister of Nature Protection Aram Harutyunyan, one of the HPPs was issued an illegal water use permit with the participation of a group of ministry officials

UN Expert: Weakening of Environmental Protection Measures During Pandemic Full of Serious Consequences
Scientists have come to the very definite conclusion that "people living in areas with higher levels of air pollution are at a greater risk of dying prematurely from COVID-19."