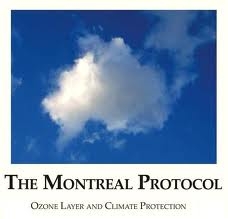 Armenia was awarded with the diploma in regard with the events dedicated to the 25th anniversary of Montreal Protocol on Substances that Deplete the Ozone Layer. Armenia ratified Vienna Convention for the Protection of the Ozone Layer in 1999. The Montreal Protocol obliges parties to phasing out the production of numerous substances believed to be responsible for ozone depletion. Armenia adopted the law “On Substances Depleting Ozone Layer” in 2006. From 2005 to 2007 ozone-depleting substances, particulate pollutants and refrigerators. 112 custom’s officers and 712 foremen employed at productions passed training for the purpose of preventing the sale of subjects and ozone-depleting substances. From 2010 the import of hazardous ozone-depleting substances was banned into Armenia.